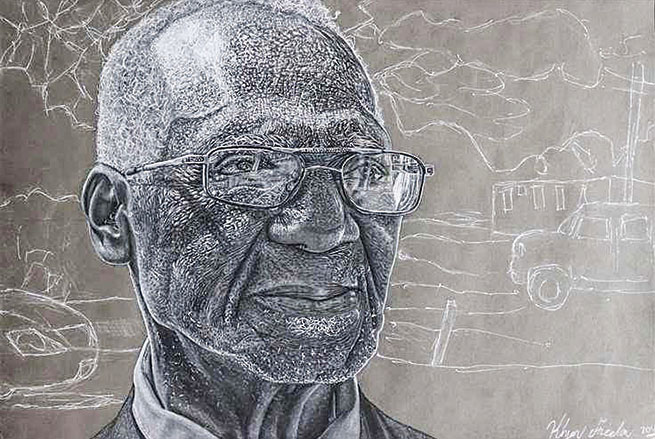 An Oxford High School senior has received national praise for one of his pieces of art. Khyan Freelon was named a National Medalist by the Alliance for Young Artists & Writers earlier this month for having one of the ‘most outstanding works in the nation.’

Freelon was also named a Gold Key recipient for the same piece of work titled ‘Torture of Time.’

The piece is of Freelon’s great grandfather, Leroy Daniels, who will turn 90 on May 29 and is meant to show ‘his melancholy of his Alzheimer’s and how he basically seems to relive his past almost every day.’ Freelon used charcoal and white ink to capture his grandfather’s essence.

“The detail of the wrinkles signifies all of his years of living that lead up until now,” Freelon said “When I always tell him about this award he is surprised about it but I always have to repeatedly explain it to him.”

When Freelon revealed the finished work to his family it was a very emotional experience for everyone.

Art was something Freelon discovered his freshman year. He was a member of the football team before deciding to step away, but he did not want to stop sports altogether. After unsuccessful attempts trying out for other teams, art was still there, waiting for Freelon. The two have been a successful combination ever since.

“They loved it,” Freelon said. “My mom, she’s like, ‘Where did you get this gift from? You just started to do all this stuff in high school and you’ve developed it (into this).’”

Following graduation, Freelon plans to attend Northwest Mississippi Community College and then the University of North Texas to pursue a degree in art.

Through scholastic awards such as the National Medalist, students in grades 7-12 from public, private or home schools can apply in 29 categories of art and writing for their chance to earn scholarships and have their works exhibited and published.