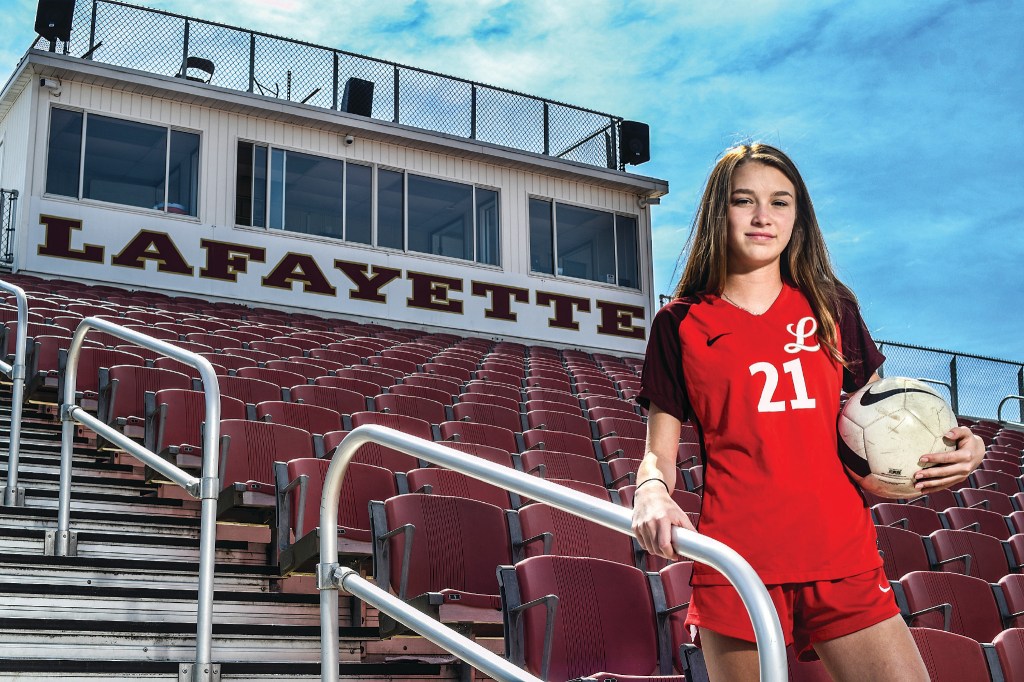 Lucy Wilson cried a bit as she walked off the field in Brandon, Miss. back in February. Winning a state title is one thing, but doing so in dominating 5-1 fashion and scoring a hat trick is another.

It was the culmination of a tremendous year for Wilson and the Lafayette Commodores. A 24-2 season and a state championship is one heck of a way to go out for a Lady Commodore senior, but Lucy Wilson isn’t just coming back for one more season – she has two more remaining at Lafayette.

Truly, it should be an international mandate: when you score a hat-trick in the state championship game, you’re automatically the MVP of the All-Area team. However, Wilson’s 2018-19 campaign went far beyond one massive game on the biggest of stages.

Just a sophomore, Wilson led the team in goals this season (30) and finished third on the team in assists (12). Her 72 points on the year were the most on the team by 12. In the playoffs, Wilson turned it up another level, scoring six goals in four games, capped by a hat trick in the state championship game.

Despite being a young kid on a young team, Wilson’s season wasn’t exactly a surprise to the Commodore staff. As a freshman, Lucy led the team in fouls. However, she showed enough flashes for the team to believe they could lean on her a little more as a sophomore.

“I kind of did expect this to be honest. I don’t think she surprised us too much this year. She had so much to offer, and because of what she did last year, I just felt like she was going to continue growing and becoming even better,” Scruggs said.

Her youth really just portrays itself in her size. Lucy Wilson isn’t a big girl, and at times that has gotten her in trouble. Scruggs said a lot of those fouls her freshman year were a product of this. Now, with age, she’s learning more how to use her body allowing her technical skills to take another leap.

“Back then (when she was a middle schooler), we thought the same stuff. She’s very talented. She’s very technical with the ball and good with the ball at her feet,” Scruggs said. “It’s just that she was small and it took her some time to have some experience figuring out how to use her body against players who were bigger.”

It’s hard to improve over a 72 point and state championship hat-trick. However, Scruggs said she’s challenged Wilson, going into her junior year, to take the next step as a leader and to help her teammates grow both on and off the soccer field.

For as good as Lucy Wilson was this year, O’Connor’s numbers were better. Morgan O’Connor led her team and the area in goals (34) and points (75). Her goal scoring ability is a game-changing one that Oxford will dearly miss next year, but her impact goes just beyond putting the ball in the back of the net.

“She’s the first one in the drill and the last one to leave. She’s just got a different motor when it comes to training and games,” said Oxford head coach Hunter Crane. “But what we’ll miss the most is her ability to score anytime she touches the ball. The creative things she does around the net is probably what we’ll miss most.”

Leading Oxford in assists as a sophomore, her field vision from the middle of the field and versatility are hands down the best thing she brings to the team. As a freshman, she played every game for the Chargers, yet as a sophomore, she did even more. Strum scored 18 goals – second on the team – and had 26 assists. With the departure of O’Connor, Crane says he’ll likely move her to striker for a more scoring-heavy role moving forward.

Another young member of a very young Commodore team, Lindsay’s steadiness made her a mainstay in the middle of the Lafayette lineup. As a freshman, she added nine goals and seven assists. Her coach credits increased confidence in contributing to her jump from her eighth grade varsity season to now.

Oxford’s senior leader in the middle of the field, Emily Hayward, took it up another level for the Chargers in 2019, her second year completely focusing on soccer. Hayward scored 16 goals and notched 20 assists her senior year, bringing speed and toughness to the center of the field. She’ll continue her soccer career at ICC next year.

If you thought Lucy Wilson was young compared to her output on the year, meet Julia Perkins. Still in middle school, Perkins was second on the Commodore team in goals (23) and points (59). Her second year with the team, Scruggs said she began to come out of her shell as an eighth grader.

Entering her final season, the Lafayette coaches said Harrison had a different level of drive and demeanor to her game. She knew she’d need to be more of a leader on such a young team, and that newfound motivation carried on to her play in the Commodore defense.

“You could absolutely tell how motivated she was this year. She wanted to lead the team and put everything out there. She absolutely accomplished that,” Scruggs said.

Now a junior, Maria Jones has played every game for Oxford since she was a freshman. She’s played a handful of different positions for the Chargers in her time, and that versatility and steadying play on the back line played huge dividends in the 2018-19 season.

“When we played at Tupelo, Maria was playing outside. Their best player, Sydney Hughes, was out there and she scored three goals in the first 20 minutes,” Crane said. “I told Maria ‘hey I need you to move to center and just watch her.’ Sydney never touched the ball the rest of the game and we end up winning 4-3.”

This season was Treloar’s first with Lafayette, and boy was her presence felt in her quick acclimation. She was named MVP of Lafayette’s region for her role as a consistent force in the defense that was one of the best in the entire state.

Oxford’s senior captain for the season, Rychlak was one of the more dependable pieces all year for the Chargers. Starting since her sophomore year, Rychlak’s soccer IQ and speed helped the senior control the back line of defense for a team that recorded six shut outs on the year.

In route to hoisting the state championship trophy, Lafayette allowed just 15 goals in 26 games. During their four-game playoff stretch, they allowed just one. Truly a remarkable defensive display on the season, Caitlyn Rhea was the backbone.

Lafayette added a new goalkeeping coach going into this season, allowing Rhea to work on the craft full-time. Obviously, a good defense is a product of more than just good goalkeeping, it also has to do with the four girls in front of her and how they play together, something Scruggs said she excelled at this year.

“She was so vocal this year communicating with the backs. As a whole on defense they did such a good job.”