Lafayette dugout keeping it loose as they prepare for playoff run 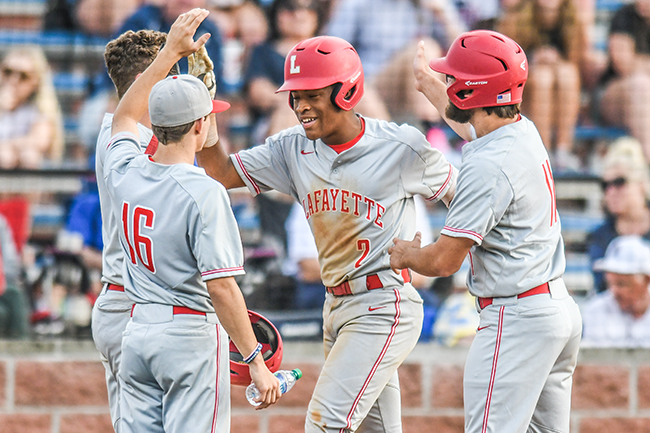 “Get him a bucket! Because he’s throwing up!”

It seems a little rude at times. Mostly it’s just annoying. But that’s their goal.

Lafayette’s dugout has been the site of a handful of similar chants to the one above for the last two years. “Get him a bucket! Because he’s throwing up!” That one is in reference to pitchers throwing high in the zone. But there’s others – others that get repeated throughout the course of the game. Repeated a lot.

It’s something started by Commodore senior Shawn Payne and junior J.R. Bundren about two years ago. Everything developed from them watching YouTube videos of teams fooling around during rain delays. The chants would materialize from videos of the sort or from ones they saw other teams use, adapted to their own liking.

However, the chants take on a bit of an alternate meaning, beyond just getting in the opponent’s head.

Coach John Walker is a baseball guy. He arrived at Lafayette about the same time the chants and mantras started getting going. A more intense guy, it took him a little while to get to a point where he’s okay with the antics. Now, he’s almost embracing it.

“For me, it’s a little bit of a reminder that it’s just a game and they’re supposed to have fun,” Walker said. “I’m a little high strung most of the time so it allows me to get some of that anxiety and tension out of the dugout.”

Admittingly, Walker says he often has to ask them to tone it back. Bundren and Payne admit themselves that there’s a line they’ve had to fine between fun and harassment – that they try to walk right up to it without going any further.

“Get a clean ball! That one’s dirty.”

Ultimately, their coach is fine with things as long as their actions aren’t individually targeting or demeaning anyone on the opposing team.

“There’s never any malice with it at all. They’re just having a good time and trying to crack jokes. Sometimes it’s pretty entertaining but sometimes I don’t even here it,” Walker said. “I’m blessed with the ability to tone it out at times.”

While keeping the dugout engaged is one thing, the team acknowledges a big part of it is to work their competitive advantages. They regularly notice their antics getting in the heads of their opponents.

“Last week vs West Point we had a first baseman staring into our dugout literally every single second of the game except when the pitch is thrown,” Payne said. “We’ve had multiple stare downs and comments made about it.”

In the end, it’s just a little way for the boys to have some fun and stay engaged in the ballgames. And hey, something is clearly working for Lafayette. After finishing below .500 and winning just two region games last year, the Commodores went 14-9-1, winning the region this year.

“The ball ate him up! It’s huuuuuungry!”

Locking down the state: Ole Miss men’s and women’s…