What the Lafayette seniors are saying about their turnaround, 5A State Championship berth 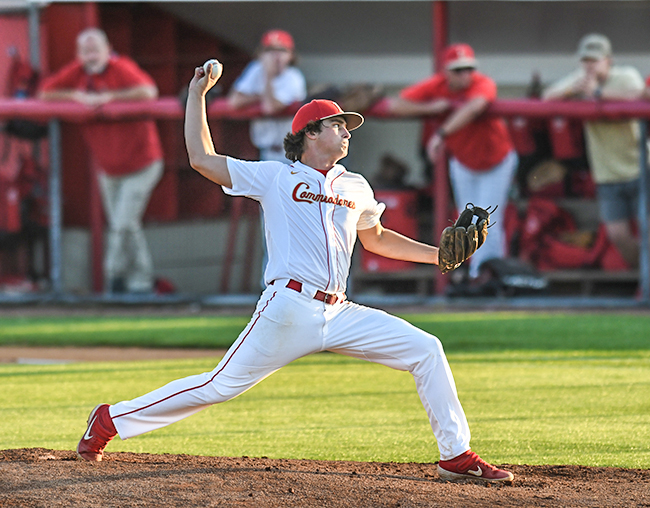 Lafayette High's Foster Westbrook pitches against Saltillo in Game 3 of the MHSAA Class 5A playoffs at W.V. Brewer Field in Oxford, Miss. on Tuesday, May 14, 2019. Lafayette High won 8-1 to advance to the state championship series.(Bruce Newman, Oxford Eagle)

Just having thrown a complete game while allowing just one run to wrap up the 5A north-half,  clinching a berth in the 2019 State Championship, Lafayette Commodore pitcher Foster Westbrook said it took him all the way back to seventh grade.

“It’s just such a big improvement. I don’t really know what to say… We had seven returning starters. All of us had that experience. We were just able to back and fight for it every day – we just knew we didn’t want the experience of last year,” Westbrook said. “We never looked back on it. That stuff is in the past now.”

That stuff from the past was a lot of turnover and disappointment in the Lafayette baseball program. This group of seniors going to Pearl for the state title series has been through a lot.

Juniors at the time, they had to endure a coaching change – going from now-athletic director Greg Lewis to their current coach John Walker, coming from New Albany. At the same time the new system was being implemented, the school was also making a jump from a 4A to 5A classification.

“It means everything to us, especially these seniors. To have that kind of coaching change so late in your high school careers, it’s tough,” senior Ben Harper said. “We had to adjust to the new program coach Walker’s put in. To be able to come together after such a big change, it’s amazing.”

Lafayette is off to states. They beat Saltillo 8-1 in the third game of the 5A North-half final.

The adjustment Harper talked about didn’t exactly come easily for the Commodores.

Their first season under Walker, the team went 11-12. Finishing dead last in their region just one year ago, Lafayette bounced back to go 6-3 and win the whole region. Going from being outside the playoffs completely as juniors, this senior class is now at 20 wins and playing for a state championship.

“At that point, (after what happened last year) you don’t think about Pearl. You’re always trying to be optimistic about, ‘we got it next year.’ But honestly, at that moment, I didn’t see it. Everything just kind of clicked and came together,” Harper said. “From being not where we wanted to be last year, to say it nicely, to now playing in the state championship, it’s just great.”

There are nine seniors on the Commodore roster, and this will be their final series in a Commodore uniform. Five of those nine – Harper, Meagrow, Westbrook, Will Larson and Braxton McCord – are starters in the standard Commodore lineup. Another three have made at least 13 appearances for the team this year.

“I’m sure this means the world to them. They’re part of that upper-class group of guys that had a new coach come in and really changed some things and did some things differently,” Walker said. “They really bough in, and we’ve talked about that. But they really bough in to what I wanted them to do and what we’re about. It’s paying off for them.”

It’s a Commodore unit that truly has bought in and truly is playing their best baseball when it matters most. Lafayette will roll into Pearl having won nine of their last 10 games, an unreal achievement for a team that won just 10 games all of last season.