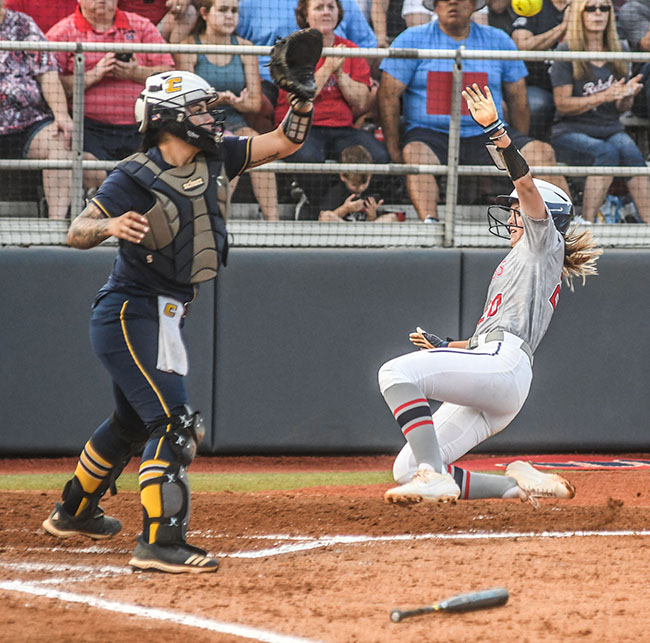 Brittany Finney was electric, the bats were on fire and Chattanooga could not overcome a slow start in  Ole Miss’ 12-0 five-inning win to close out day one of the Oxford Regional at the Ole Miss Softball Complex on Friday.

Heading into this weekend the Rebels (38-17), who are the No. 11 National Seed in the tournament, had dropped five of their last eight games, including an 8-0 loss to Kentucky in the second round of the Southeastern Conference Tournament last week. Friday’s game was about letting the rest of the country know they were not going anywhere.

“We put the pedal down and kept going and didn’t stop,” Ole Miss head coach Mike Smith said. “We know the last week and a half to two weeks of the season was very uncharacteristic of the way we played the entire year. I think a lot of people were doubting us a little bit and so I think that was kind of a statement game for us.”

The Rebels (38-17) advance to Saturday’s winners’ bracket game at 12 noon against Louisiana who defeated Southeastern Missouri in Friday’s early game.

Finney had one of her best outings of the season, working three innings and giving up only three hits while striking out five Chattanooga batters. She needed only 41 pitches to get nine outs.

Molly Jacobsen will take the circle against Louisiana, but Finney working only three low-stress innings on Friday gives Smith some insurance the rest of the weekend.

“It’s going to be huge,” Smith said of Finney having a short outing on Friday. “You never know how deep we’re going to have to go in this thing especially with the weather a little bit. It got a little cooler at night but it’s still humid and hot so the less energy that she needs to exert out there is better for us down the stretch.”

A shaky start by the Mocs (37-16) was taken advantage by the Rebel offense, which scored six runs in the home half of the first inning and followed it up with five runs in the second frame.

Most of the damage was done by the Rebels bottom half of the order, going 7-of-10 at the plate and recording nine RBIs. Right fielder Kaylee Horton went 3-for-3 with three RBIs, second baseman Jessica Puk went 2-for-3 and also had three RBIs.

“I think that’s part of where we’ve struggled a little bit, especially later on in the year,” Smith said of the bottom half of his order. “We’d get the top of the lineup on base and we were struggling at the bottom.”

Chattanooga falls into the losers’ bracket and will play SEMO in the first elimination game of the regional at 2:30 p.m. The winner of that game and the loser between Ole Miss and Louisiana will then play another elimination game at 5 p.m.