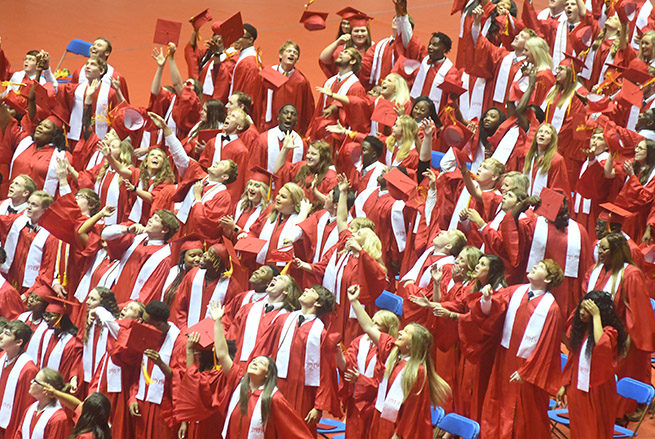 Lafayette High School continued its tradition of being “anchored to excellence” at its graduation ceremony on Friday, May 17.

The ceremony began with the presentation of colors by the LHS Air Force JROTC, followed by students from every grade holding flags, which represented the academic journey of the graduates.

Lafayette County School District Superintendent Dr. Adam Pugh addressed the graduating class, reflecting on how far the students had come since they began their education.

“As we take time to honor our students and their accomplishments, we want to acknowledge that this day started 13 years ago in August of 2007, as they entered the kindergarten classroom,” Pugh said. “This senior class has had the opportunity to make history by accomplishing many achievements, both academically and athletically.”

The graduates have earned over $1 million in scholarships to various universities, Pugh said. He also acknowledged that the class of 2019 was the largest to ever come out of the school.

“The Commodore Award is voted on by teachers for a student who exhibits the following characteristics: good citizenship in school and the community, positive attitude, exceptional behavior in the classroom and in school and thoughtfulness towards others,” Crockett said.

This year, the Commodore Award was presented to Destiny Mooneyham.

Senior members of the LHS choir program took the stage to perform the song “Home,” arranged by choir director and Mississippi Teacher of the Year Hannah Gadd.

During his speech, salutatorian Zach Meagrow gave thanks to the faculty and staff members who guided the graduates throughout their time in Lafayette County Schools. Meagrow also expressed his gratitude for LHS Principal Glenn Kitchens, whom he said greets each student personally each morning and is one of the “most supportive administrators” in the district.

Meagrow, who also played on the LHS baseball team, graduated with a 4.25 GPA. Meagrow is the son of Stuart and Dana Meagrow. He will attend Mississippi College in the fall with plans to major in biology.

Valedictorian Caleb Lafferty spoke of his classmates’ futures, and the various milestones and obstacles they will face as they grow. Lafferty began his address with an anecdote about the Marquis de Lafayette, whom he called “the original Lafayette Commodore.”

“Here we are, the class of 2019, Commodores also on the brink of greatness,” Lafferty said. “We have attended one of the best schools in the state, we have access to some of the best academic resources, we have brilliant teachers who have gone far and above what is required of them. … Now, we have to make our own decisions.”

Lafferty finished high school with a 4.43 GPA. He is the son of Andrew and Karen Lafferty and will be the first LHS student to attend Brown University in the fall.