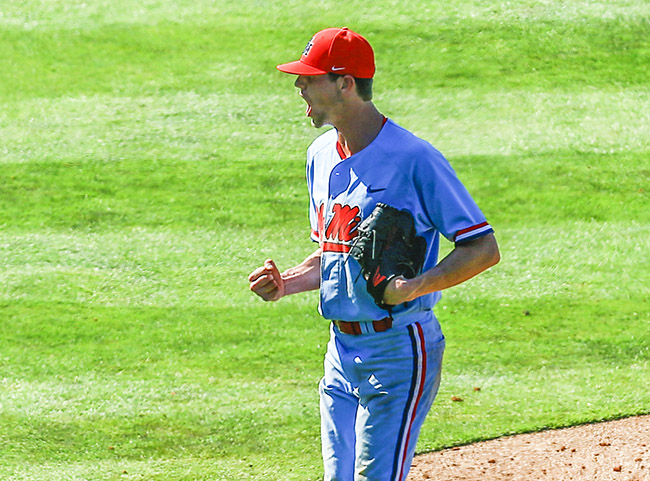 Ole MIss pitcher Ryan Olenek reacts after the final strike to defeat Missouri 2-1 during the ninth inning of their Southeastern Conference tournament game on Tuesday, May 21, 2019, in Hoover, Ala. (AP Photo/Butch Dill)

HOOVER, Ala. – Ryan Olenek was cool and collected as he took the podium alongside Will Ethridge and Mike Bianco following the first Ole Miss game in the SEC Tournament. Having just picked up his second save in as many games, the center fielder by trade is in new light as the Rebel closer. And he’s handling it quite well.

Tuesday, in the team’s first game of the SEC Tournament, Olenek trotted out to the bullpen as the Rebels were batting in the bottom of the seventh. Thomas Dillard was the leadoff hitter that inning with Olenek batting fifth.

Ole Miss head coach Mike Bianco said after the game that he knew then they may bring in Olenek to finish the game off. So Olenek was jogging out to get some throws in and stay loose during an inning in which he would later end up hitting a single.

“We haven’t had a lot of guys like that. We’ve had a couple of dual guys,” Bianco said. “I don’t think it’s a big of a deal to those position players. I think if you did it to a normal reliever, a normal pitcher, it would really disrupt their routine. But for those (position players) I don’t think (a normal warmup) is necessary.”

Crazy how calm Ryan Olenek is. Dude doesn’t pitch in a game for over a month then comes in from CF for the last two #RebsBSB saves. Yet this is how he handles it. Just so smooth pic.twitter.com/qh67eTysz7

If using a career center fielder on the mound is an experiment, Mike Bianco is the Rebel mad-scientist.

Most position players don’t warm up like pitchers. They just grab the ball and throw, Bianco explained following the game. While Tuesday in Hoover, Olenek was putting in work in the bullpen during a Rebel offensive inning, that’s just one mode to go about it.

This past Saturday in Knoxville, a 5-4 win Ole Miss win over Tennessee, Olenek picked up his first save on the mound. The Rebel center fielder had pitched four innings this season before that game. However not all were in save situations and three of them were losses. In that game, Olenek simply warmed up in the outfield between innings. Left fielder Thomas Dillard – Ole Miss’ alternate catcher – just squatted down and had Olenek throw him balls.

“He’s just a competitor. He’s going to do whatever it takes to get guys out,” said full-time pitcher Will Ethridge, who started Tuesday’s game. “Whether that’s making plays in center field or on the mound and throwing 90-miles-per-hour right down the middle to get guys out there. He’s just a great competitor and he’s big for us.”

Saturday against Tennessee, Olenek was called on in a 5-4 game. It was a desperate spot. Ole Miss had lost six games in a row and were desperate for answers. He came through with the save. Tuesday in Hoover was similar. Mike Bianco called on the senior to finish off a 2-1, elimination game. The result was the same.

“I just throw strikes. I just have the mentality to throw strikes,” Olenek said. Considering the moment, the poise and calmness he responded was relatively astounding. “You just prepare like you would for anything. It feels good to be out there and I love being out there and having the opportunity to do it. I just try to take advantage of it.”

In a Rebel bullpen that’s had its struggles lately, having another reliable arm to call on is a welcomed sight. For Ryan Olenek, it seems like it’s just another day at the ballpark.