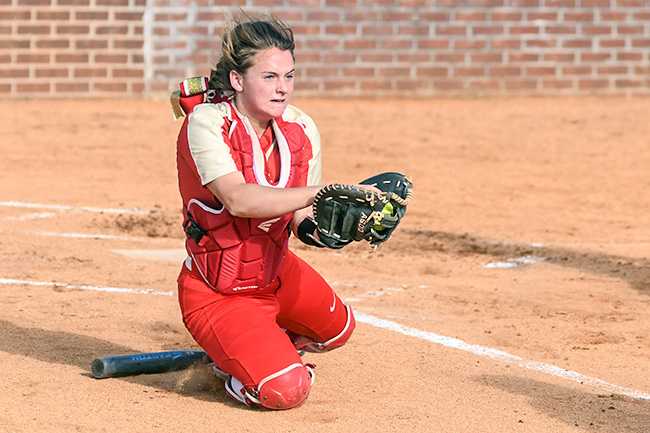 Teams with four game losing streaks aren’t supposed to reach the North Half final. You could say the same about teams that start sophomore pitchers or ones that lose three of four right before the playoffs. Well, Katie Jenkins’ Lafayette softball team did all of the above and still made the North Half.

A season of ups and downs, the Lafayette girls turned things up when it mattered most, riding their division championship all the way to the North Half final in just their second year in playing 5A ball. Their coach chalked their style up to a sort of Laissez-faire attitude – they’re just so collected that they never let the low points in the season really get to them.

“Their attitude in the dugout and their presence in the game, they just really enjoy the sport. So after those loses, they just let it go and went on to the next one,” Jenkins said. “Sometimes that’s frustrating as a coach. You want them to sit and dwell on a loss and be mad about it for a minute. But they didn’t.”

It certainly helps having a senior class that Jenkins described as the “perfect mix of chemistry.” They had the vocal leaders and those leading by example. But if you ever look into the Commodore dugout during an inning at the plate, you’d never know there were girls on the team that weren’t vocal.

“They all contributed different things that made the whole-body mesh together very well,” Jenkins said about her senior core of Mariah Holland, Madisen Rainey and Chloe Russell. “Oh yea and there’s just that they were really talented – I’ll miss that.”

When asked about a turning point for the year, the coach had two answers. Both were losses. The team lost 5-2 at Grenada in their second game of Division play. They then turned things on and won their next three division games before that second turning point. The Lady Commodores dropped their final regular season game 2-1 in a ten-inning game.

“I saw it on their faces. They had played hard and they knew they had played hard. But just an inning or two didn’t go the way we wanted to,” Jenkins said. “They were frustrated and that kind of just showed them that they are really good, they just have to play the whole games. It’s not a loss that I’m disappointed about; it’s a loss you have to get better from.”

The girls certainly did get better from the loss. They won their first three playoff games and four of their first five to waltz into the North Half final for the first time since moving to play 5A softball. Losing to Neshoba Central, a team that would go on to win state, is in no way a disappointing year.

After being bounced in the second round of the playoffs in 2018, the 2019 Commodores made it another two rounds, advancing all the way to the North-half final. What’s in store for next year? There’s no way to know. But we can know what the girls are thinking about.

“Last year, they didn’t get that taste for how close (state) was. I think now they’re hungry for that,” Jenkins said. “I like that that’s already in their head and they’re thinking that’s what we’re set for.”