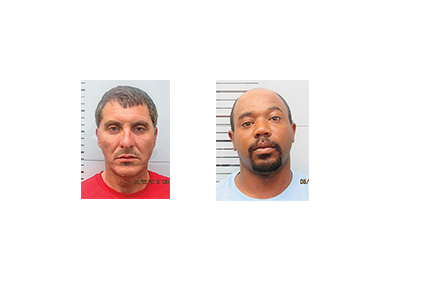 Blake Marquis, left, and Datrel Williamson, right, were arrested over the weekend for driving under the influence.

The holiday weekend was fairly quiet for local law enforcement, but two men did manage to find themselves behind bars after driving under the influence.

On Saturday, Oxford Police officers responded to a call of a driver that appeared to be under the influence of drugs or alcohol. When they pulled the car over, the officers came in contact with Blake Marquis, 38, of Abbeville and began a DUI investigation. During the traffic stop the officers discovered Marquis had at least three prior DUI convictions on his record. Marquis was arrested and transported to the Lafayette County Detention Center where he was charged with DUI IV. A Justice Court Judge gave him a bond of $10,000.

On Memorial Day, OPD officers pulled a car over on West Jackson Avenue for driving carelessly. Officers came in contact with Datrel Williamson, 31, of Hattiesburg and suspected him of driving under the influence. A DUI investigation began and officers learned Williamson had at least two prior DUI convictions on his record. Williamson was arrested and taken to the Lafayette County Detention Center where he was charged with DUI III, speeding, careless driving, no driver’s license and failure to yield to an emergency vehicle. A Justice Court Judge gave him a bond of $5,000.