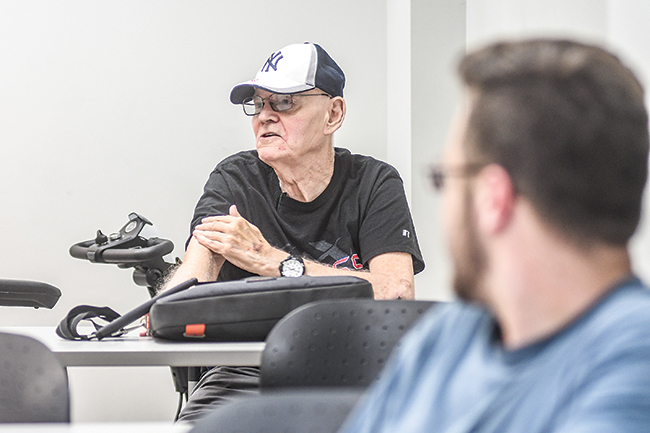 Willis, 77, was a veteran of the United States Navy and a retired Teamster, who recently celebrated 29 years of sobriety, something he said was one of his proudest accomplishments. In 2018, he enrolled at the University to pursue his lifelong dream of earning a college degree. Having previously started his studies at Ramopo College in New Jersey, he was just 15 credit hours shy of a degree in social sciences. Willis first made headlines in a piece the EAGLE published on August 21, 2018 titled “Scooting to Success,” which told the story of how he got his famous scooter that helped him travel around campus in spite of his limited mobility.

Once Andrew Newby, Assistant Director for Veteran and Military Services, found out Willis enrolled at Ole Miss, Newby said he made it his mission to help Willis. Newby worked with local nonprofit Volunteers for Veterans to get the scooter for Willis. While Willis was the first 77-year-old student veteran Newby had worked with, and he said Willis was a “remarkable man” who fit right in with the Ole Miss Student Veteran family.

“Handsome Jim never met a stranger, and was always a friend to everyone he met,” Newby said. “He didn’t let his age or his disabilities get in his way, and he was a joy to be with. Lucky for Handsome Jim, ‘one never graduates from Ole Miss,’ and he will always be one of my fondest memories of this place. The University sends its sincerest regrets, but also remembers his smile, his lovable laugh and the way he made others feel.”

It was not uncommon to see Willis sitting in the Veterans Resource Center after class, eager to strike up a conversation with anyone who walked in. He was a great listener, Newby said, and paired that skill with a wicked sense of humor and storytelling ability.

“The veterans are really good guys, and made me feel comfortable and are so excited that, at my age, I’m going back to school,” Willis said in 2018. “They said, ‘That’s fantastic. It’s a good thing for the younger guys to see.’”

Willis said he was looking forward to scooting across the stage as an 80-year-old graduate, and his efforts have not been wasted. According to Newby, Ramopo College has made arrangements to award Willis a posthumous degree in recognition of his hard work.

“I can’t say enough about how incredible he was. The fact that he came back to school to pursue his education, to live out his lifelong (love of) learning, goes to show just how much he was capable of doing,” Newby said. “I’m lucky to have known him, however briefly, and I’m certain his imprint will forever be on my life, my work and my views on education.”