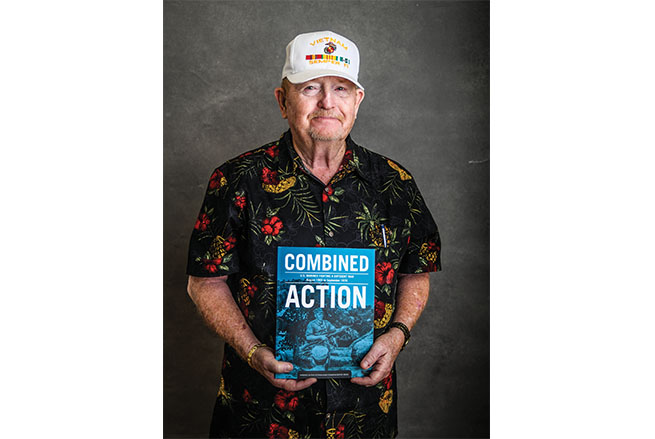 Many stories have been written, told and shown on the silver screen about the Vietnam War, a war that many would choose to forget ever happened – a divisive war that spawned many opinions by people who were for and against going to Vietnam.

Gene Hays has written several books about his time serving as a Marine in the Vietnam, but his latest publication chronicles a group of Marines who were one of few bright spots in an unpopular war. Hays’ new book, “Combined Action,” tells the stories of Marines who served in the Combined Action Program.

The Combined Action Program embedded Marines in the Vietnam villages as members of their communities tasked with defending the villagers, and themselves, from the North Vietnamese Army and the Viet Cong guerillas. Comprised of a 13-man Marine rifle squad and a medical Navy corpsman, they were augmented by three squads of Vietnamese Popular Forces. The VPK was akin to the United States’ National Guard but “much worse,” according to Hays.

“These guys were situated around all of I Corps, the northernmost tactical areas for the Vietnam War,” Hays said. “Their purpose was to embed themselves into the villages and hamlets. They were training the popular forces on how to defend themselves, how to use the weapons and also tactics. They in turn provided us with a background of their culture, and they also gave us names of people that were coming in at night with the Viet Cong and taking over the village.”

Hays joined the Marine Corps in September of 1965, and was trained as an aviation electronics technician at a Naval Air Station in Memphis. When he got overseas to Vietnam, he was introduced to the Combined Action Program after he was overheard conversing with a Vietnamese worker. Hays’ time spent working alongside the Combined Action Program during his one year in Vietnam helped him be selected to author this book.

He retired from the Marine Corps as a Master Sergeant.

The United States Marine Corps history division wanted to put a book together that documented the works and actions of the Combined Action Program’s time in Vietnam. Hays was contacted by someone who knew about the USMC’s idea for the book, and told him to apply to be selected to write it. In 2016, the Marine Corps heritage foundation awarded Hays a research grant to produce the book.

With only one historian at Hays’ disposal to help with the book, it took three years for the project to be completed. “Combined Action” is the last book or pamphlet coming out, and is part of the commemoration of the 50th anniversary of the Vietnam War.

“The Marine Corps has high standards and that applies to works that come out (about them),” Hays said.

Being limited in scope and length of the book commissioned by the Marine Corps, Hays is coming out with another book of his own that contains portions of “Combined Action” in terms of its history, but will have a more personal touch with stories and photos by Marines who actually served in the Combined Action Program.

The book is free and can be ordered through the Marine Corps history division website. Hays also has a select number of copies for anyone interested in obtaining one, and can be reached by email at rghays47@gmail.com. He also hopes to one day incorporate the books into the local school systems.