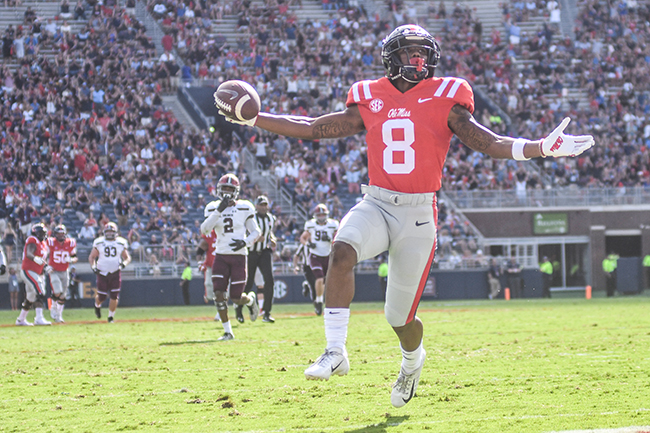 After A.J. Brown, D.K. Metcalf and DaMarkus Lodge all left for the NFL after this past season, Ole Miss simply doesn’t have many players on the roster with a lot of snaps at receiver. The three starters listed on the pre-camp depth chart are junior Braylon Sanders, who has 20 career catches, sophomore Elijah Moore, who has started in four career games, and redshirt freshman Miles Battle.

“It’s definitely weird being the older guy. These three years flew by,” Sanders said. “But those guys, those freshmen are impressive. All of them really, but the biggest one is (Johnathan) Mingo… he came in at 215 (pounds) and he doesn’t even look like it. He’s going to be really good. All those young guys will be good.”

As Sanders mentioned, there are a lot of fresh faces in the receiving room. Ole Miss signed five freshmen in the 2019 recruiting class. That doesn’t even count freshmen from a year ago who redshirted. And if one asks Rich Rodriguez, he doesn’t plan right now to redshirt anyone. He likes using eight receivers in a game.

Many of these guys were here last year with Brown, Metcalf and Lodge. They saw those guys work on a day-to-day basis in the way that saw all three either get drafted or sign with NFL teams. That Nasty Wide Out mentality isn’t lost on the 2019 receiving crop.

“Everyone’s just trying to keep the NWO alive. We want the whole group to shine, we don’t care which individual it is,” Battle said. “We’re all talented players and we’re just ready to show what we can do. With those three guys, we had some depth, we just didn’t get to play. We all have something to show and something to prove.”

Moore is the player who has shown the most. When Metcalf got injured last year, Brown moved outside and Moore stepped into the starting slot receiver role. He started in four games, catching 11 balls (an Ole Miss freshman record) for 129 yards against South Carolina. Playing in nine games as a freshman, it’s weird that he’s almost the most experienced guy in the room. Moore is primarily a slot receiver, but Rodriguez said he wants all the receivers to learn all of the positions.

“We’re motivated by (the fact that no one knows us). I promise you by the end of the year you’ll know who every last one of us are,” Moore said. “But at the same time, I can’t play like a sophomore. I need to be more of a leader and learn to take control of the game more. It’s consistency.”

When the three returning guys are asked which freshmen impressed them the most so far, they all have the same answer: Johnathan Mingo and Dannis Jackson.

Both Mingo and Jackson are Mississippi natives and they’re both four-star recruits. Yet they play football very differently. Mingo is huge – he’s in the D.K. Metcalf mold of massive human beings. Meanwhile, Dannis Jackson is just 6-foot-1 and 190-pounds, but he can run like no other.

In the first day of fall camp, six receivers got first-team snaps. Moore started on the inside, with Miles Battle and Braylon Sanders on the outside. Demarcus Gregory, a redshirt freshman, Tylan Knight, a converted running back, and Dontario Drummond also got reps with the first team.

Really, the NWO tradition goes back long before Metcalf, Brown and Lodge. Ole Miss has had five receivers drafted into the NFL since 2014, four of whom (Brown, Metcalf, Laquon Treadwell and Donte Moncreif) were drafted in the first three rounds. But the tradition really starts with the 2009 draft class and Mike Wallace. Now, a decade since Wallace’s draft night, Ole Miss is going to be looking for a few from a bevy of fresh faces to help carry on the tradition.