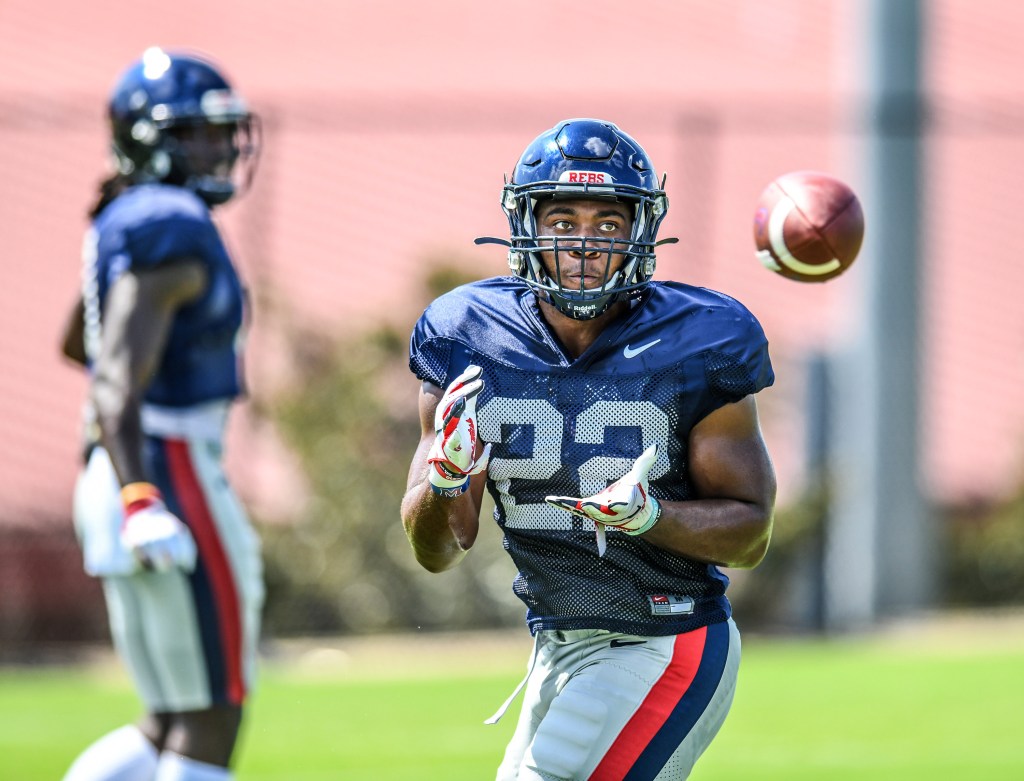 On Monday, Ole Miss held their sixth day of open practices for fall camp. With one scrimmage under their belts, Ole Miss now has a better idea of where they’re at and what they need to work on as the season opener at Memphis quickly approaches. As the team shapes together, you learn more about where they’re at and what the team might look like. Today’s practice observations focus on that topic – how will the Rebels look differently in 2019?

Rich Rodriguez’s offense truly does do it all. Even in the limited time, Ole Miss is running plays. During periods of media viewing, they’re running out of 10, 20, 11 and 12 personnel. Essentially, the personnel numbers read first-digit, running back count, second digit, tight end count. The number of receivers on the field is the two numbers added together and subtracted from five.

The base Rich Rod offense will be out of 11 personnel, as many college and professional teams work. One running back, one tight end and three receivers on the field together. But what’s fun about this offense is how much they get away from that base grouping.

Ole Miss has a few good running backs at their disposal, so many so that junior D’Vaughn Pennamon is now working as a tight end, and Tylan Knight is a full-time slot receiver. One of the best ways to get the best use out of Scottie Phillips, Snoop Conner, Jerrion Ealy and Isaiah Woullard is to use two running backs on the field together. Wednesday’s practice showed that a lot.

Here’s Rich Rod talking about how fast he wants this #OleMiss offense to play, and some of the challenges associated with that pic.twitter.com/NHl7jnyEkK

Phillips and Connor, lined up on either side of quarterback Matt Corral, were running sweeps, option plays and wheel routes out of the backfield together out of 20 personnel. Phillips was still the primary option on the sweeps, with Connor running as a lead blocker, but they also practiced a handful of route concepts from that formation. Phillips and Connor got the exclusive first-team reps at running back during media viewing periods, with Woullard and Ealy working with the twos.

With Jason Pellerin returning from the concussion protocol and Pennamon now working as a tight end or h-back, that gives Ole Miss more options in 12-personnel as well. The tight ends, who were not targeted much at all in Phil Longo’s scheme, are likely to be much more important with Rodriguez. When Ole Miss goes 10-personnel, it’s exclusively with both Tylan Knight and Elijah Moore working out of the slot together. And using two, smaller shifty slot receivers on the field together is just fun.

2. Backup quarterback competition, running back rotations seem to be molding into place

Grant Tisdale scrimmaged Saturday in a non-contact jersey. John Rhys Plumlee and Kinkead Dent were live to take hits.  However, Dent has not been on the field this week after suffering a concussion in the scrimmage. Plumlee being live in the scrimmage over Tisdale means something. Add that to the fact that Tisdale has just been a better thrower of the football in practice the last few weeks, and Plumlee’s athleticism may not be able to let him make up the ground.

Grant Tisdale took a moment after Wednesday’s #OleMiss interview session to individually shake the hand and thank every media member in attendance.

It’s the little things at quarterback sometimes, especially for a young freshman

3. Healed bumps and bruises from the opening scrimmage

Qaadir Sheppard was at practice, but not participating due to his hand injury. He had a soft cast on his left hand, covered in a brace, from the knuckles up to his forearm. Alex Givens, who’s been recovering from back surgery, is back at practice for the first time but in a non-contact jersey. Others still not practicing in full include Sincere David, Jon Haynes, Jalen Julius and Luke Knox.