Why Water Valley can repeat as state champs: the developing quarterback 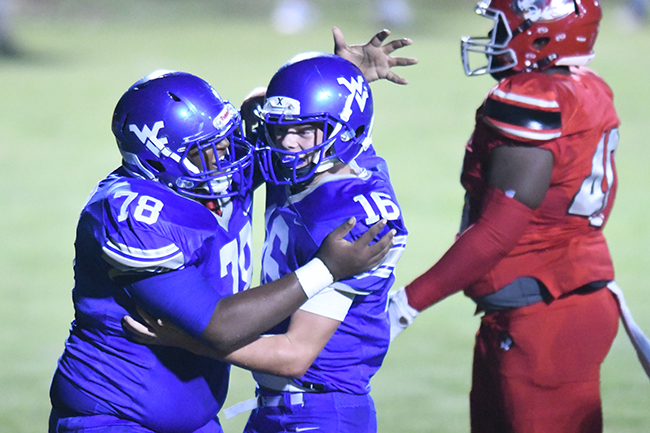 Water Valley was getting a new point guard. But when you show up in Water Valley, Miss. as a point guard, you’re just going to be on the football field eventually.

Jacob Truss came to Water Valley in 2017, known much more for his abilities on the hardwood than the gridiron. He had never lifted weights, had hardly thrown a football other than for fun and didn’t know the team. The coaches didn’t know what do do with him, either. Now, two years later, he’s the key cog in a team that has a real chance of repeating as 3A State Champions.

Clearly an athlete, they tried Truss at safety and running back, before realizing late in the 2018 season that he was the Blue Devils’ best option at quarterback. How’d he reward the team? He went 16-22 for 322-yard and seven touchdowns in the playoff semifinals and championship game. With Truss at the helm for not even half a season, Water Valley was the 3A state champion.

“Really last year, he was a junior. And everyone said we had a junior quarterback. But really he was just an infant as far as quarterbacking goes,” head coach Brad Embry said. “And he’s still learning. All senior high school quarterbacks are learning. But he’s on even a different learning curve.” 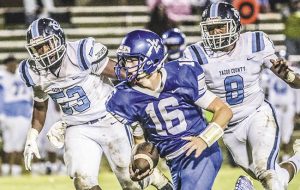 That learning curve for Jacob Truss is unique. Every boy throws a football growing up, but Truss said he didn’t really know how to throw a football a year ago. He certainly didn’t know the dynamics of playing quarterback, but even over the course of the 2018 season, he progressed.

Before the 2018 playoff semifinal game at North Panola, Truss had completed just 29 percent of his passes. Those last two games, culminating in the state championship, he completed 73 percent of his throws. This summer’s goal: Water Valley knows they have a good athlete under center, but wants to make him an even better thrower.

“I feel more advanced passing, definitely,” Truss said. “Before last year, I never really worked on throwing. And then we just started working on it over the offseason and it’s came pretty natural.”

A few weeks ago, Embry called his quarterback into the team meeting room. Without telling him what was happening, Embry rattled through all the reads in their playbook, quizzing his senior quarterback. Truss passed with flying colors.

Water Valley’s Jacob Truss threw 4 TDs in just over one quarter of work, two from about 60yds out in the scrimmage against New Albany. @WVBlueDevils pic.twitter.com/BLnktlJdhv

Truss said he doesn’t exactly sit down with pencil and paper and study as if it were a biology exam, but he thinks about this stuff a lot. It’s not just the mechanics and the physical throwing motion that are improving, it’s how he sees the game as well.

“He just understands football better, that’s the main thing,” Embry said. “God’s blessed him. He’s got a lot of ability. He’s a gamer and he likes to compete. But he looks like a different guy throwing the ball right now.”

A week ago, Truss was relatively unbelievable. Compared to where he was a year ago, he looks like a different human being throwing the football. In a jamboree game against 4A New Albany, playing up a division, he literally could not be stopped.

The first team offense, led by Jacob Truss, lead four touchdown drives in just over one quarter of play before being removed for second stringers. Truss threw four touchdowns over the course of essentially one quarter, two from about 60-yards out.

Truss, the former point guard, still has a little bit of that ‘run the team’ mentality. It fits well at quarterback. He’ll pick his teammates up before workouts, dropping them off at his house after. For a while, it was just how he got to know the kids that all knew each other when he showed up in 2017. Now, he’ll lead trips to the bowling alley, just the small things to get the team together.

He may never have imagined this role when he moved into Water Valley, but Jacob Truss is the key component of the Blue Devils’ run at repeating as state champions.

Chargers, Commodores and Blue Devils playing in jamborees this…