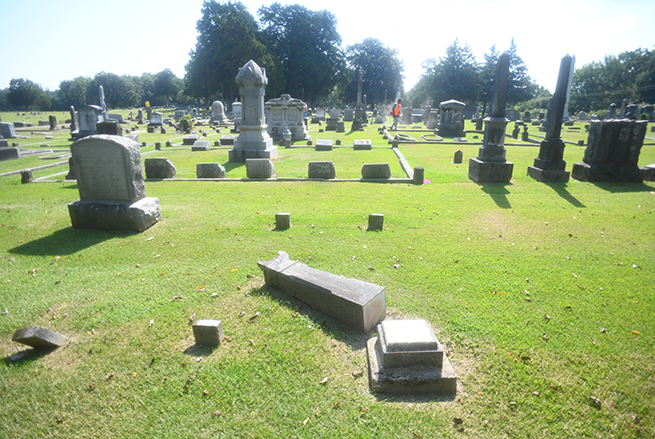 On Tuesday the Board of Aldermen voted to declare 21 plots in St. Peter's Cemetery, located in Oxford, Miss. on Wednesday, August 21, 2019, abandoned so they could make repairs, which will cost $6,800. (Bruce Newman, Oxford Eagle via AP)

After several attempts to contact family members, the City of Oxford is taking over plots at St. Peter’s Cemetery in order to repair damaged grave markers.

During Tuesday’s regular Board of Aldermen meeting, the City voted to declare 21 plots abandoned so they could make the repairs, which will cost $6,800. Oxford’s Chief Operating Officer, Bart Robinson, presented the board with the proposed declaration.

Attempts were made to get in touch with and locate descendants of those who were buried in the selected graves, but the City was unsuccessful.

“We received no comment from our public notice,” Robinson told the Board prior to their vote.

Many of the plots are over 100 years old, and with no family members around to tend to the grave markers, they have become unreadable or have even broken apart. The first of what will be a multi-phase project will include the repair and reconstruction of 21 markers and headstones. The project will move forward as funding allows.

The first grave markers that will be repaired in the cemetery are in a group closest to the North 16th Street and Jefferson Avenue intersection.