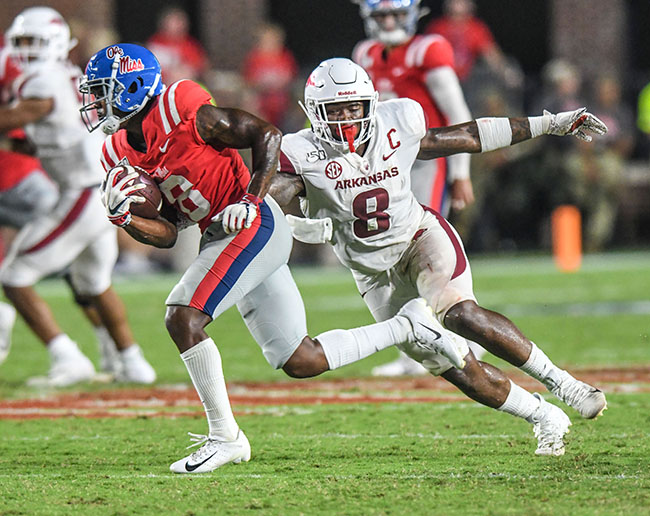 In the season-opening loss to Memphis the Ole Miss offense accumulated 173 total yards. In Saturday’s 31-17 win over Arkansas they nearly doubled that effort in two quarters.

Much was said of how the Rebel defense showed signs of improvement after one week with new coordinator Mike MacIntyre, but much was equally said of offensive coordinator Rich Rodriguez’s first outing.

During his weekly press conference, Rodriguez said he was confident his group could show signs of improvement from the first week to the second week. The offense backed that up, with four touchdowns and 483 total yards.

“We still got a lot of things to work on to get better at, but they have such a good attitude and they worked hard in August and in spring practice to learn the system,” Rodriguez said. “Today was good. I’m probably going to be sick after watching the film because of some things that we left out there or some things that we didn’t execute. But, they played really hard and they followed the plan pretty well.”

The one consistent in the Rebels’ first two games has been the play of Elijah Moore. The sophomore receiver was the lone bright spot against Memphis, leading the team with four catches for 60 yards. On Saturday, Moore had a career night, catching seven passes for 130 yards and two touchdowns.

Two games into the season and Moore is becoming Matt Corral’s go-to receiver, showing the ability to catch anything thrown his way. The pair connected for a 46-yard touchdown pass early in the fourth quarter, which was a career-long for each.

Without A.J. Brown and DK Metcalf lining up out wide on Saturdays, Moore is expected to fill that void as much as he possibly can.

“It was a great game. Big, big, big lessons (learned),” Moore said. “I’m ready for it. Position’s like this, people got to step up. Just like when DK went down last year and I had to step up. This year, I know I’m going to be a big role in the offense along with a couple other receivers. I just felt like we did what we were supposed to do.”

Moore was the only receiver to crack the century mark. The trio of Jerrion Ealy, Dontario Drummond and Octavious Cooley combined for 29 yards less than what Moore totaled by himself.

The passing game was given a major boost by the improved play of the offensive line. After getting sacked three times by the Tigers’ defense a week ago, Corral’s front five lowered that number by two against Arkansas.

Corral looked more comfortable in the pocket on Saturday after getting his first start under his belt last week. There was still some questionable decision-making by the redshirt freshman, including his decision to hit Cooley with a shovel pass that resulted in a Cooley fumble and a 69-yard Arkansas scoop-and-score in the fourth quarter to make it a seven-point game at the time.

“I was just paying attention to the details,” Corral said. “(Rodriguez) really broke down their defense and made an easy game plan for us and they were giving us the looks we wanted. We did a good job of executing. Coming from last week, I knew what to expect.”

The running game showed massive signs of improvement after being held to 80 yards against Memphis. Scottie Phillips accounted for 143 of the Rebels’ 237 rushing yards and both rushing touchdowns. Corral rushed for 46 yards while Snoop Connor ran for 42 yards on eight carries.