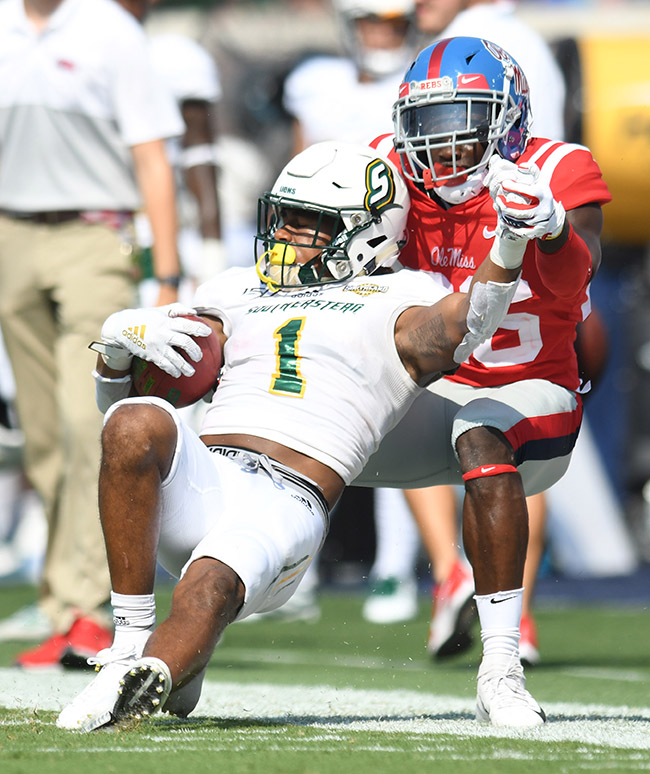 After two weeks of steady improvements from last season, the Ole Miss defense stumbled at times on Saturday.

During their 40-29 win, the Rebel secondary struggled with Southeastern Louisiana’s passing game. Of the Lions’ 375 total yards, 309 of them came through the air. Both totals were the most allowed by the defense this season.

In the first two games of the year, Ole Miss (2-1) held Memphis and Arkansas to a combined 32 points. On Saturday, the Lions (1-1) nearly scored that many themselves.

“It was definitely us,” Ole Miss linebacker Myles Hartsfield said. “(SELA) really didn’t give us much. It was just mostly mental mistakes that we did that we’re going to have to go back tomorrow and fix for next week. Usually, if they make a play on a formation that they did this week, the next team is probably going to do the same thing to see if we fixed it.”

The Rebels struggled with the ability to get off the field on Saturday. The Lions converted two of three fourth down conversions and were 5-for-13 on third down conversions.

Despite giving up over 300 yards passing, the run defense kept the Lions in check. The defense also picked off quarterback Chason Virgil three times and recovered a fumble. Virgil was also sacked twice.

The Lions were held to 66 rushing yards, but two of their four touchdowns came on runs of 20 and 14 yards, respectively. The Rebels held an opponent to less than 100 rushing yards in back-to-back games for the first time since 2015.

With the Lions trailing by eight points and driving down the field, linebacker Donta Evans came up with the play of the game. Evans, who got the start for the injured MoMo Sanogo, picked off Virgil on a 4th & 11 at the Rebels’ 28 with five minutes remaining.

The Rebels capitalized on the turnover with a 22-yard field goal by Luke Logan for the winning margin.

“I thought their energy at the end and they kept fighting and made some big stops there in the second half a couple times was big for us,” defensive coordinator Mike MacIntyre said.

Matt Corral and the Rebel offense put up 459 total yards and four touchdowns, but also had shaky moments in the game. Corral fumbled the ball twice, with the Lions recovering it inside the Rebels’ 10 yard-line and leading to a touchdown.

It was a near-balanced attack on offense for the Rebels. Corral threw for 239 yards and two touchdowns while the combination of Corral, Scottie Phillips, Jerrion Ealy and Snoop Connor rushed for 220 yards and two scores on 50 carries.

“I think we were just playing their game and not ours,” Corral said. “It’s something we’ve got to work on in practice. It’s not about who we play, it’s about how we play. I feel like we’ve just got to keep getting better.”

Ealy had a record-breaking outing in his third game as a Rebel. The true freshman rushed for 95 yards and a touchdown on his way to setting a new freshman single-game all-purpose yards record.

The Rebels will conclude their longest home stand of the season next week, when they host California (3-0) at 11 a.m.

The Jerrion Ealy revolution is upon us, sort of