Water Valley putting pieces together, ready for biggest test of the year 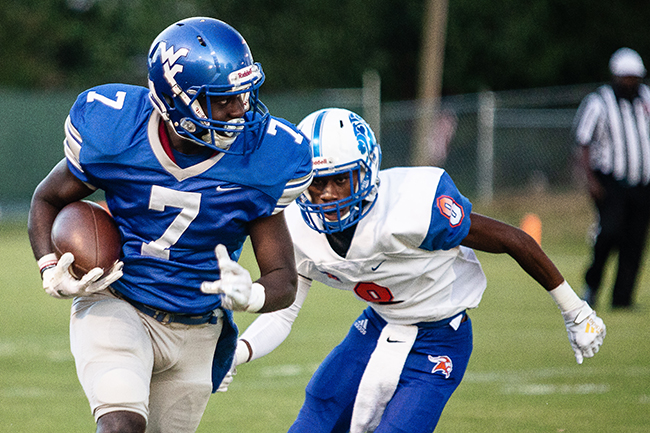 The 2019 Water Valley team is simply different than the one that ran through the 3A state playoffs last year.

3-0 through the early part of the season, they haven’t lost since October of 2018. But they’re about to enter the part of the schedule that has a chance to define the 2019 Blue Devils.

Water Valley is young. They’re starting three ninth graders, and the opening month of the season was just about putting the pieces in place. But they still have time to grow, with two games remaining until district play. However, the next two games at Calhoun City and at Winona may be the two toughest on their schedule.

“Calhoun City is good, man. They’re good,” head coach Brad Embry said. “They run, they run and they run some more. They’re athletic and they run. It’s the best team, the best athletes that we’ve played thus far. And it’s at their place. It’ll be a big test.”

Water Valley has also dealt with some pretty major injuries thus far that have thrown some wrinkles in to the normal development curve. Senior offensive tackle Matthew Childress got hurt on the team’s first play of the year. He played a bit a week ago, but Calhoun City will be his first game full-go. They’ve also lost a senior defensive lineman for the season due to an achilles injury.

Through three weeks, a big improvement over a year ago when the team won the 3A state championship is coming from the quarterback play. Jacob Truss took over right before the playoff push last year. A senior now, this is his first full year starting at quarterback.

“Compared to this time last year, there’s no comparison. This time last year, I was teaching him to take a snap and stuff. Seriously,” Embry said. “Quarterback is a deal where you almost have to be a coach. Without doing it in junior high, he missed so many things that you don’t realize you learn. We have a little kid, who’s our backup quarterback, who has played more quarterback than Jacob. But with Jacob, every game he plays, he gets better and better.”

For now, the Blue Devil eyes are focused on a Calhoun City team that isn’t shy about their approach. The Wildcats have attempted three passes in four games. Three. They literally run the ball on almost every play. It’s an interesting thing to prep for, as the Water Valley team has gone through the week with just their base defense plus a bear front, one that includes an eight-man front designed to stop that run.

It’s a unique approach, and one the team expects to challenge them more so than any team so far. On paper, they’ve certainly been tested, a 14-13 come from behind win to open the season at Ripley, where they scored all 14 points in the second half. But this team is thinking forward.

“I don’t think we’ve really been challenged,” senior Damicah Hervey said. “Ripley was the first game, so we had new players in different spots. It was close but we had it. But we’re going to start getting challenged when we play Calhoun City and Winona, teams like that are just faster and better than the teams we’ve played.”

Hervey was a force last week in the team’s 48-0 win over Bruce. Part of the blowout was Hervey returning an interception for a 50-yard touchdown to put the team up 14-0.

“We’re young, but I really feel like we can go back this year. I really think so,” Truss said. “Last year, it was about the defense. Everyone was talking about the Water Valley defense. Now I think we’re leading the team with the offense. But there are some defensive players stepping up. Damicah Hervey and Darius Tolbert, our safeties, are great. With Damicah, just whatever side of the field he’s on, don’t throw it to that side.”

Despite the 3-0 start to the year, there’s still a lot for this Blue Devil team to work on. Embry thinks he needs more from his rushing attack. The team averaged 179 yards per game on the ground a year ago. Through three games in 2019, that number is 134 yards per game. That said, they are running more efficiently this year, averaging more yards per carry than a year ago.

The Calhoun City game on the road this Friday kicks off the real, challenging part of this Water Valley schedule. They then to Winona before ending the regular season with five straight divisional games. Is this team actually ready to go back to the level of last year’s state championship team? We’re about to find out.