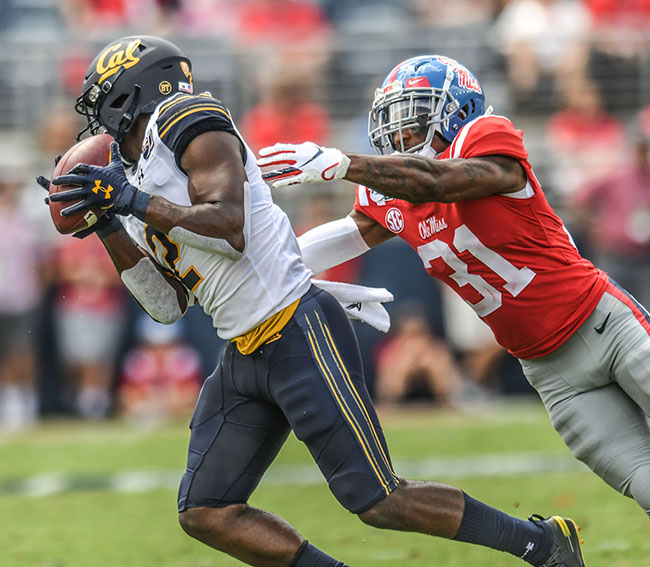 Following Saturday’s dramatic 28-20 loss to No. 23 California, Sept. 7 feels like a distant memory.

That was the night Ole Miss defeated Arkansas 31-17. They then gave the impression the once-beleaguered defense had finally turned the corner.

In the first two games against Memphis and Arkansas, the defense bent, but did not break. They gave up an average of 362.5 total yards, but also held their first opponents to an average of 16 points a game. In the Memphis loss, the defense did not allow a touchdown in the second half and the Razorbacks did not score a touchdown until the fourth quarter.

Against Southeastern Louisiana last week and California on Saturday, the defense began to show cracks in the armor they seemingly put together in the first two weeks of the season.

Coincidentally, those two opponents were considered by head coach Matt Luke to be the only ones to challenge his defense this season, particularly the secondary.

Last week, the Lions amassed 379 yards of total offense with 309 of them through the air. The Golden Bears torched the Rebels’ defensive backfield for 373 of their 433 total yards.

“This week, I’ve got to go back and look at hard, we weren’t as tight on some of the coverages as we needed to be a couple times,” said Ole Miss defensive coordinator Mike MacIntyre. “They made some good throws on us down the middle on some zone-type coverages. We’ve just got to tighten it up and get better at it. So, there’s a little bit here and little bit there in all those situations.”

In both games, getting off the field on third down was an issue for the Rebel defense. The Lions converted 5 of 13 third down attempts and Cal converted third downs at a 50-percent clip (6-of-12).

Third and long situations were an issue for the Rebels all afternoon against Cal. On three separate occasions, Cal quarterback Chase Garbers converted on third downs of 10 yards or longer. Two were during their opening possession of the second half of 10, conversions of 10 and 14 yards, respectively.

The third quarter drive was capped by a nine-yard touchdown catch by Oak Grove alum Jordan Duncan to make it a 21-13 Cal lead at the time.

“It was kind of a different situation each time,” MacIntyre said of the third downs. “(Garbers) made some good throws. He scrambled around and made some plays. A few times we played it right and a lot of times we didn’t play it as well as we’d like.”

Run defense has been a bright spot for the Rebels in the early part of the season. Through four games they have held opponents to under 100 rushing yards a game (94.8).

The meat of the Rebels’ conference slate begins next week in earnest against No. 2 Alabama. On Saturday, the Crimson Tide amassed 514 total yards in their 49-7 win over Southern Mississippi.