ANALYSIS: Does Ole Miss actually have a quarterback controversy? 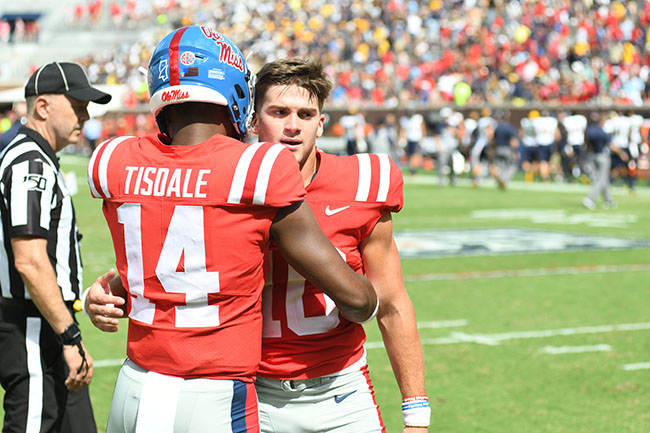 Forget the outcome and the controversial, at best, finish on Saturday. What John Rhys Plumlee did in relief of Matt Corral over the final two drives was nothing short of sensational.

Ole Miss announced on Monday that regular starting quarterback – redshirt freshman Matt Corral – is day-to-day with bruised ribs. How much he’ll be able to throw and practice will depend on his condition throughout the week. If he’s not ready, it’ll be up to the true freshman – Plumlee. Coaches made it seem like it’s Corral’s job when healthy, but also said both might play. All this presents the obvious question: is Ole Miss actually dealing with a quarterback controversy, or is it just Matt Corral’s job when healthy?

“I think John Rhys showed he can go out there and handle himself. He brought a spark into the stadium and on the sideline,” head coach Matt Luke said on Monday. “Moving forward, what he can bring with his legs, especially against a really good defense, I think that addition gives (opponents) something else to prepare for. Because Matt (Corral) and John Rhys are so different, they have to go into the game preparing for both. Again, you hope that Matt is healthy and they have to prepare for both of them. That is the goal, to get them healthy and have both of them available.”

Both Luke and offensive coordinator Rich Rodriguez emphasized that fans could see both quarterbacks on Saturday against Alabama, regardless of Corral’s health. That’s not something one would typically say if Corral was 100 percent the go-to guy. At the same time, it might be something he’d say to make Nick Saban and Alabama prepare for both quarterbacks.

What Plumlee brings to the table is the short of sheer athleticism that Matt Corral simply doesn’t have. Corral is a competent runner, and fans saw that on Saturday against Cal. He ran for 74 yards on 16 carries in that game. But the first play Plumlee stepped on the field, people could sense a different level of speed. Plumlee’s first carry went up the right sideline for 47 yards. Corral just doesn’t have that.

No matter what happens here this is insane and #OleMiss might have a QB competition brewing pic.twitter.com/42fGbpU6pS

In theory and in practices, Corral has been the better thrower. Yet, his throwing prowess hasn’t totally been displayed in games yet. The irony here is that the first half against Cal was Corral’s best game yet. He opened the game throwing 16 for 22 for 162 yards against an incredibly talented Cal secondary. But he slipped in the second half as the offense stalled. Then he had to leave mid-way through the fourth quarter after taking a shot to the abdomen.

“The biggest thing, is what can (Corral) do in practice?” Rodriguez said. “We’ll find out more (on Tuesday). We’ll see if it hurts when he throws. Normally, it’s more pain when you throw than when you run. But we’ll know more as the week goes on.”

Rodriguez emphasized on Monday how much work he gets to the second and third string quarterbacks with the starting offensive line and receivers throughout a regular practice week. That’s likely the reason Plumlee was able to step in right away and play so well. This week, as Ole Miss progresses towards Alabama, Plumlee may actually be the one getting the most reps for the first time since he showed up on campus late this summer. Time will ultimately tell who Ole Miss’s starting quarterback will be when they arrive in Tuscaloosa later this week.