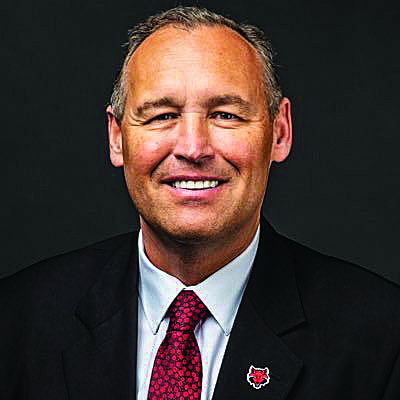 Editor’s Note: Following a Sept. 19 board meeting of the Institutions of Higher Learning, the pool for the next University of Mississippi Chancellor has been narrowed down to eight candidates, per a report from Mississippi Today.

Over the next eight days, the EAGLE will print biographies of each of the eight candidates, going in alphabetical order. The second candidate featured will be Kelly Damphousse.

Kelly Damphousse has served as chancellor at Arkansas State University since 2017. Since his arrival at ASU, he has coined the catchphrase “Every Red Wolf Counts” as an operating philosophy.

Named to the Jonesboro, Ark. Regional Chamber of Commerce Board of Directors after his arrival, he has also served in official and unofficial capacities with local and regional agencies.

Damphousse, who was raised in a fishing village in northern Canada, attended Lethbridge Community College, where he earned an associate’s degree in law enforcement in 1982. A failed professional hockey tryout foiled one of his two early life ambitions – a career as a goalie in the NHL. His degree was the starting point for his other goal – becoming a Royal Canadian Mounted Police officer. According to his biography on the Arkansas State University website, Damphousse likes to say that three years in prison at the Alberta Correctional Service where he served as a correctional officer refocused his dream of becoming a Mountie.

Damphousse completed his bachelor’s degree in criminal justice, specializing in law enforcement and police science in 1987 at Sam Houston State University in Texas. While there, he met Beth Smith, who later became his wife. After a brief stint as a security manager for Macy’s in Atlanta and New Orleans, he returned to school at Texas A&M University where he studied deviant behavior, something with which he was very familiar. His thesis on the cause of youthful involvement in Satanism earned him his master’s in sociology in 1991. For his 1994 doctorate, he studied the long-term impact of drug use under Howard Kaplan, the director of the laboratory for the Studies of Social Deviance.

Damphousse moved to the University of Oklahoma in 1997 as member of the Department of Sociology, where he directed several research projects, most notably the “American Terrorism Study” with Brent Smith of the University of Arkansas. He also worked on the Arrestee Drug Abuse Monitoring project in Oklahoma City and Tulsa, and the first-ever field test of voice-stress analysis deception detection software. Damphousse was the principal investigator or co-principal investigator on 42 projects at Oklahoma and Sam Houston State.

The co-author with Smith and Jeffrey Gruenewald of the forthcoming 2018 book, Patterns of American Terrorism, Damphousse also served as the co-editor of Social Science Quarterly, volumes 92 through 97. He has authored or co-authored 26 peer-reviewed articles in scholarly publications, 31 book chapters and 20 peer-reviewed technical reports.

Becoming associate dean in 2004, he was appointed interim dean of CAS at Oklahoma in 2013. Damphousse was made the permanent dean in 2014. As the leader of OU’s largest and oldest college, Damphousse led the first college-wide strategic planning exercise as well as assisting faculty and staff in the raising of more than $30 million in private giving.

He is the third permanently appointed Chancellor of Arkansas State, the sixth to hold the title since it was instituted in 2006. Damphousse joins the line of successors to the university’s founding leader, V.C. Kays, from 1909 as the 13th chief executive of the institution.

He and Beth have two daughters who are both graduates of Oklahoma. Kayleigh, a 2014 sociology graduate, earned a master’s degree at Kansas, and is now the assistant director for retention and persistence at the University of Florida. Kristen, a 2016 biology graduate, recently completed her master’s degree in public health at Emory University. The Damphousses are also the proud parents of Maple Leif, a standard poodle and lab mix, who serves as the First Dog of Arkansas State and tweets at @MapleLeifDamp.