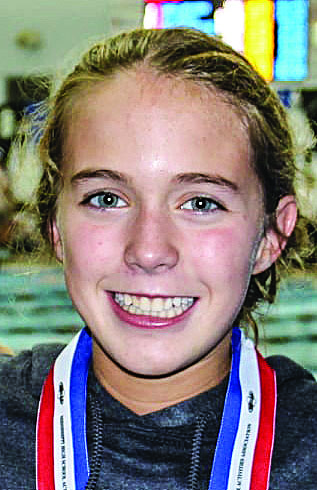 The Oxford High School swim team traveled to Tupelo this past weekend for the state meet, coming off one of the best swim regular seasons in program history.

From a team perspective, the Oxford girls finished third in the state, with the boys finishing fourth. But truly, the story came from OHS sophomore Julia Dennis.

Dennis medaled four times on Saturday, individually finishing third in the 200-yard freestyle and winning the 50-yard freestyle. Her 50-yard freestyle swim of 23.42 broke the Mississippi state meet record. In breaking the record, it was just the first time in state history that two girls swam a sub-24 second 50. Maddie Howell of Madison Central, who previously held the record, finished second with a 23.71.

“That was a really fun swim to watch. It was as exciting of a race as there was the entire meet,” head coach Robert Gonzalez said. “That was a monumental swim. When you’re on top of the mountain, it’s very difficult to overtake somebody. They don’t want to lose that position, especially as a senior. Julia had to go out there and compete for it. It was one heck of a swim.”

Howell, now a senior, originally broke the state record her sophomore year and then broke it again her junior year. Dennis’s victory on Saturday was the first time Howell had lost that 50-yard freestyle race in four years. Dennis’s time of 23.42 ranks third in the nation this season among 15-year-olds.

“Cole is an extraordinarily talented young swimmer for our girls,” Gonzalez said. “To have two on the podium on the same event, that’s really hard to do. We had girls knocking each other off the podium, just because of how competitive it is within our program.”

Ellinor Maxwell, another Oxford swimmer, finished fifth in that same 50-yard freestyle event. With Cipkowski, the team had not even decided to swim him in the 100-yard butterfly until the day before the north half. A swimmer who had prior specialized in the freestyle, Gonzalez said he’s improved in butterfly tremendously over a quick span.

The meet concludes what has been one of the best seasons in program history, one that also recently saw Gonzalez named as the MAC Coach of the Year for swimming.

“It’s the most successful season since the 2010 team, on the girls side, who won the state championship. And it’s not even close,” Gonzalez said. “In our sport, it’s very definitive. It’s a very finite sport. All the numbers indicate the upward trajectory for Oxford swimming. We’re really pleased with everything this weekend.”

Lafayette also participated in the state meet over the weekend, sending 13 Commodores to state for the first time since 2007.

The big news out of Ole Miss football’s Monday press conference is similar to the news that came out exactly... read more