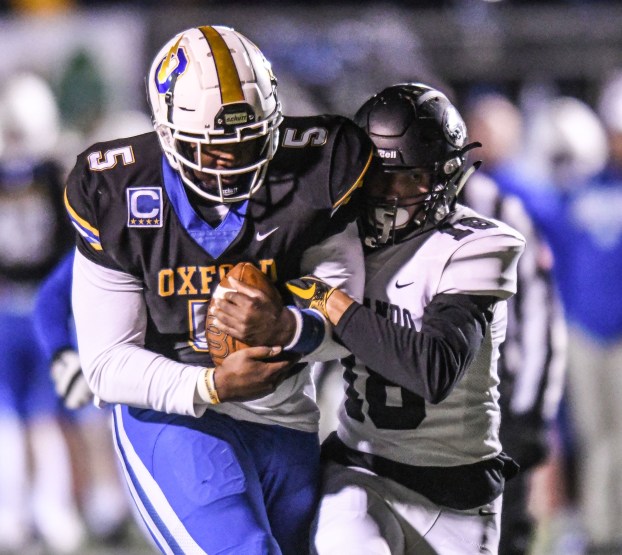 Oxford will have to wait one more week to win the school’s first 6A region title, but they still control their own destiny.

Thanks to a bend-but-don’t break defense and balanced offensive attack, the Chargers put away the Hernando Tigers 36-6 on senior night at Bobby Holcomb Field on Friday. Oxford (9-1 overall, 6-0 in 6A Region 1) finishes the regular season unbeaten at home for the first time since 2013. Now, Oxford will look to officially lock up a No. 1 seed in the upcoming 6A playoffs next week at Tupelo, something that this senior class has contributed a lot to.

“It’s a group that I’m really proud of. We have a lot of great leadership with these seniors,” head coach Chris Cutcliffe said. “They are a really close group and they care a lot about each other and want to play for each other.”

Hernando found ways to move the ball early with Daniel Jenkins in the backfield. The Chargers forced a turnover-on-downs on Hernando’s first two offensive series before building a 22-6 lead at halftime. Oxford cruised from that point on.

“I don’t think we tackled great early in the game. It improved as we went and saw us tackle a little bit better. They have a dangerous passing attack, we gave up a lot of big passing plays,” Cutcliffe said. “As the game went on, we had a little more pressure on the quarterback and got better at doing that.”

The Chargers tallied their most points since their 51 point showing last month against DeSoto Central. In this game, the Chargers got it done all over the field.

“Offensively, we always want to maintain some balance when we can. That is a goal for us as an offense. Last week, we had tough conditions at Olive Branch. It was tough to throw the football last week. I was glad to see us make plays in the passing game,” Cutcliffe said.

“There were some turnovers and things we need to address there, but he also made a lot of really positive plays for us. His decision making has been outstanding all year and continues to do a good job with that,” Cutcliffe said. “He makes plays with his legs and extends some plays in the passing game when the pocket breaks down. He did a good job with that tonight.”

J.J. Pegues and K.J. Wadley each had a touchdown, both coming in the first half.

Defensively, the Chargers had three interceptions, two of which came from Byron Pearson. He bumped his total to six interceptions on the year. Dude Person got his second interception of the season in the second half with Hernando trying to get back in the game.

Next week, Tupelo will have to beat Oxford by 11 points in order to take over the region.

“It’s a huge challenge. It’s a tough place to play on the road. Tupelo is an outstanding team. They’ve had a great season. They are well coached and have talented players. We have to have a great week of practice and get ready to play.

COLUMBUS – Lafayette needed a wakeup call, and it came in the form of a Columbus touchdown. Trailing 3-0 at... read more