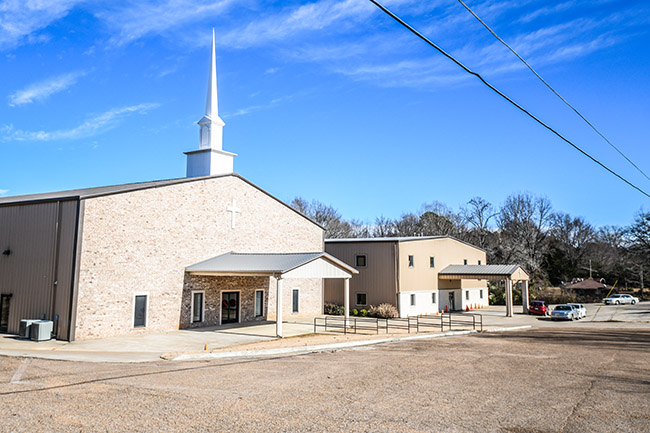 On Monday, the Lafayette County Board of Supervisors upheld their November 18 decision to relocate the Abbeville voting precinct to Springfield M.B. Church, located on County Road 106 near Abbeville, Miss. on Wednesday, December 4, 2019. (Bruce Newman, Oxford Eagle)

Abbeville residents will still vote at Springfield M.B. Church after a motion to reverse that decision failed.

On Nov. 18, District 3 Lafayette County supervisor David Rikard made a motion to move Abbeville’s voting precinct from Town Hall to the Springfield M.B. Church. During Monday’s meeting, Rikard wanted the Board to reconsider their decision and allow him time to speak to more Abbeville voters.

The item was brought up by Rikard two weeks ago due to the need of more space, with Rikards saying the Town Hall location could not handle Abbeville “outgrowing” the current location. Since that vote took place last month, Rikard stated there had been a “public outcry” regarding their decision.

Lafayette County election commissioner Lola Pearson spoke to the Board, asking them to uphold their original decision of making the church the new voting precinct for most of Abbeville’s elections. Pearson noted that since 2016, the number of registered voters in Abbeville has increased from 1,101 to 1,849 in three years.

“We didn’t just want to move it, but we had to try to move it because it’s not ADA approved. We only have one bathroom,” Pearson said. “(Town Hall) is too small. It’s 28 feet long from the entrance door to the side door. …If you have four voting machines, which I usually do for general elections, it’s too small.”

Pearson also noted the lack of parking available at the Town Hall location once poll workers and other election official park their vehicles, causing people to have to park along the street.

The reason given for wanting to step back from the Board’s original decision two weeks ago was due to Rikard stating he did not hear from enough people to consider he got information from all parties involved with the issue. There were roughly 30 to 40 Abbeville residents inside the Lafayette County Supervisors Board Room on Monday, but Rikard stated he needed to hear from more than them.

Pearson asked if they could speak to the Board, but Rikard told her it was not a public hearing on the matter so they would not be allowed to.

“Where I take full responsibility and willing to say the mistake that I made was I basically spoke to Ms. Lola Pearson (originally) and that was it,” Rikard said. “I should have went out to the community and done my due diligence to see if it was okay to move it. … I didn’t see a problem with it. As soon as we voted on it, there was just a public outcry. People didn’t want it moved for a number of reasons. With me not doing my due diligence, I am asking tonight to basically let’s just take a breath.”

Rikard’s motion to “reconsider the previous Board order, moving Abbeville precinct polling place from Abbeville Town Hall to Springfield Missionary Baptist Church and postpone the decision on whether to move the location until further investigation” died due to a lack of a second motion by another supervisor.