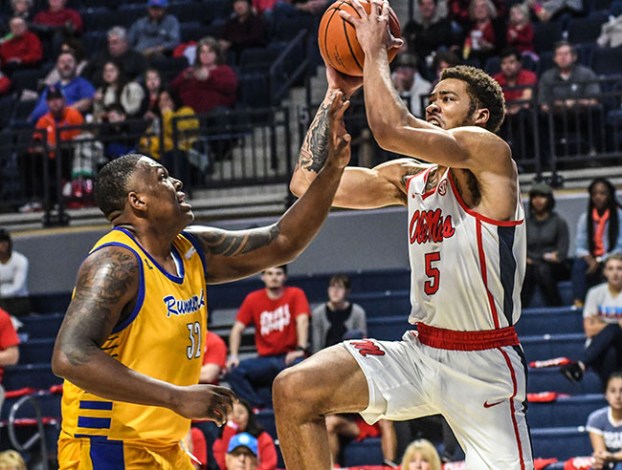 Taze Moore led Cal State Bakersfield (4-7) with 17 points while Czar Perry and
Shawn Stith added 16 and 15 points, respectively. The Roadrunners trailed
40-37 at halftime and stayed within striking distance until a 13-3 Ole
Miss run in the final four minutes settled the issue.

BIG PICTURE
Cal State Bakersfield: The Roadrunners will be road-tested when Western Athletic
Conference play begins in January. This loss opened a five-game set in 22
days, with only one home date. CSU Bakersfield survived a 15-2 deficit in
the opening four minutes and Stith finished 4 of 4 from the field and 7 of
10 from the free throw line.

Ole Miss: The win could not have come at a better time after losing three
of the four previous games A few hiccups were expected from an athletic
team that features only one senior, Tyree, in a prominent role. The
balanced scoring effort was complemented by a game-high seven rebounds
from Sy and six assists apiece from Tyree and Shuler.

STANDING OVATION EJECTION
Cal State Bakersfield coach Rod Barnes coached Ole Miss to the Sweet 16 of the
2001 NCAA Tournament after a distinguished career as a Rebel point guard.
After a warm ovation from the home crowd during pregame introductions,
Barnes received an extended standing ovation as he left the court after
being ejected for protesting a technical foul with 12:30 remaining.

UP NEXT
Cal State Bakersfield: Visits Idaho on Saturday.

Ole Miss has found their man. The University of Mississippi has confirmed prior reports that Florida Atlantic head coach Lane Kiffin... read more