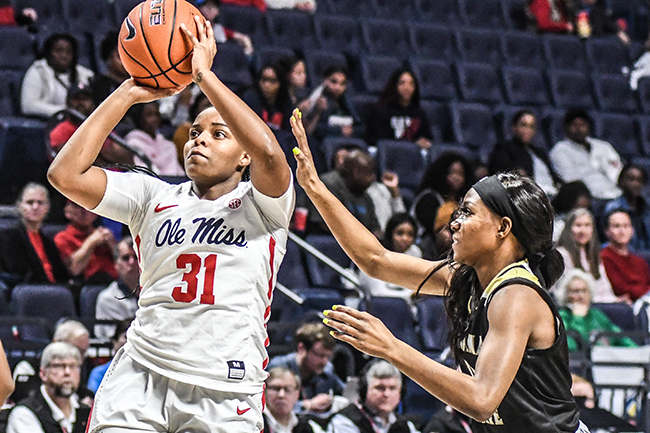 OXFORD, Miss. – The Ole Miss women’s basketball team closed out the non-conference season in style, scoring the most points by a Rebel team in more than two years amid a 93-66 win over Alabama State at The Pavilion on Saturday.

Ole Miss (7-6) didn’t let a slow first quarter get in its way. After falling behind in the first frame 14-11, the Rebels came out in the second and ripped off a 12-0 run, which was all the momentum they would need en route to a spectacular second half of basketball. Ole Miss topped its season-high quarter total twice in the second half after a third frame of 31 and a fourth of 29, assisted by a sharp-shooting and efficient offense. Six Rebels scored in double digits, the most by an Ole Miss squad since seven did so against Winston-Salem State on Dec. 20, 2009.

“We needed a night like this,” said Ole Miss head coach Yolett McPhee-McCuin. “We needed to be able to score and get out in transition and see what it felt like to play a fun brand of basketball again, especially with the bear of the SEC that we’re getting ready to go into.”

Ole Miss shot 52.3 percent overall and 60 percent from the three-point line – both season-highs – but it was the volume of three-pointers that helped the Rebels separate. Ole Miss went 12-of-20 from beyond the arc, helped greatly by four threes each from leading scorer Deja Cage (20 points, seven rebounds, two assists, two steals, 4-of-4 3PT) and senior Torri Lewis (12 points, 4-of-10 3PT) – the 30th career game for Lewis with multiple trifectas.

The 12 threes stand as the most by an Ole Miss team since knocking down 14 against North Florida one year ago today on Dec. 28, 2018. The Rebel offense also recorded a season-best 24 assists on 34 made field goals, the most since that same North Florida game last season. Ole Miss won key advantages in points in the paint (38-32), points off turnovers (23-10), fastbreak (10-4) and bench scoring (30-16). The Rebel defense showed up as well, forcing 18 turnovers while holding the Lady Hornets (3-8) to 33.8 percent overall and 16 percent from three-point distance.

“I thought that our team really controlled the pace of the game, which was really good for us,” McPhee-McCuin said. “When we score a lot of points it’s because we get out in transition and we push the ball. I thought we did that well, and I thought we made good decisions. We shared the ball at a high level today with 24 assists.”

Cage led all scorers with 20 points, her fourth 20-point game as a Rebel. Sophomore point guard Mimi Reid had an excellent day, recording her first career double-double with a career-high 16 points and 10 assists with zero turnovers – which ties for the most assists in the SEC this season. Reid was clutch from the free throw line as well, going 5-of-5 to help the Rebels to a team clip of 86.7 percent from the charity stripe.

Junior Valerie Nesbitt had an all-around superb outing off the bench as well, scoring 13 points while also chipping in seven rebounds, seven assists, four steals and a block – with nine of her points coming in the second half, pushing her season second-half average to 7.2 points (her overall season average stands at 11.6). Nesbitt, the SEC leader in steals at 3.2 per game, has had six games this season with at least four takeaways.

Ole Miss concludes non-conference at 7-6, and will open SEC play at home on Thursday against Georgia. Tipoff is set for 6:45 p.m. CT inside The Pavilion as part of SEC Network’s dedicated whiparound coverage to mark the first day of the conference season.

“We’re on the right track for where we want to go, I’ve just got to keep our kids uplifted through this because I call the SEC a jungle,” McPhee-McCuin said. “We’re getting ready to go into the safari, and we better not have butter knives. We better be ready to fight. We’re going to lean on the players that played in it last year to understand that, and as coaches we’re way more prepared because we’ve been through the jungle one time before.”