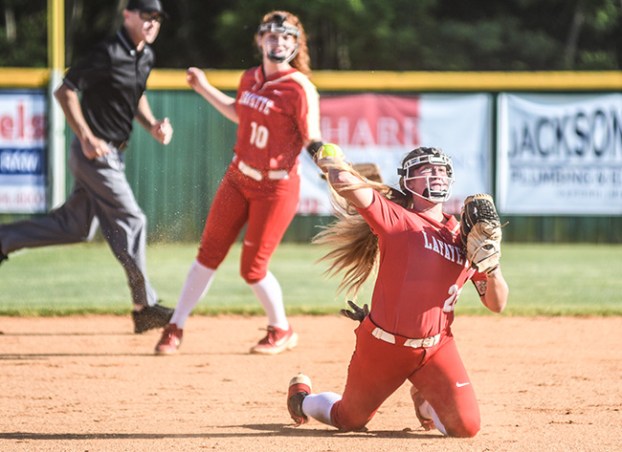 Lafayette High's Chloe Russell throws to first for the out after making a diving stop against Neshoba Central in MHSAA Class 5A playoff action in Oxford, Miss. on Monday, May 6, 2019. (Bruce Newman, Oxford Eagle via AP)

LHS Softball: “I never imagined this is how my senior year would end”

The Lafayette High School softball team was far away from home when they found out the coronavirus outbreak could trickle down and impact their season.

It didn’t take the seniors on the team long to realize they may have played their final game without even knowing so.

“It scared me a lot,” said Commodore senior Jordan Varner. “Whenever we first found out that it was in Mississippi, we had just finished our last spring break game in Biloxi. I realized then there was a chance I may have played my last game ever. It was scary.”

The team was down in Biloxi on that Wednesday three weeks ago playing St. Martin. Now, in the middle of what should be her senior season, the closest Varner said she’s gotten to real softball is hitting off a tee in her backyard into a net.

Juliana Ingram, another senior on the Lafayette team, watched the virus spread globally and watched it impact college and professional sports around her. It wasn’t until that midweek spring break game in Biloxi that things began to hit closer to home.

“Honestly, I don’t think any of us expected it to come down to us,” Ingram said. “We just thought we would be able to play, and obviously that’s not what’s happening. Being down South when all this broke out, that’s when we realized this was going to come back to us and affect our season.”

The news broke on the bus. Varner said it was actually one of the underclassmen on the team who showed her an article about sports shutting down. Three of the seniors on the team, including Varner and Ingram, went alone to the back of the bus to talk.

None of the younger girls on the team really had much of an idea what was happening in the world around them. But it was at that moment the three seniors realized that they may have played their last softball game in 2020, and maybe their last game ever together.

“I never imagined this is how my senior year would end. It’s not fun,” Varner said. “When we were playing that last game, I wish I would’ve known it potentially would’ve been our last. We talk about that a lot, how we hope we can just get a little something at the end, but we know that’s probably not realistic.”

Coming off a season in which the Commodores made a surprise run to the MHSAA 5A State quarterfinals, the girls had high hopes for 2020. Their offseason was a bit tumultuous, but the team was really excited about their senior year and building a solid rapport.

Now, all that offseason work is gone. There’s still a chance for a season, technically, but there’s little optimism.

“We’re heartbroken. I’ve been playing softball since I was five years old. I’ve been working hard to get to this part, as a senior I was kind of hoping this would be my best year,” Ingram said. “Honestly, I miss the routine of practice and the work. When you’ve been playing as long as I have, you’re just not ready to see it end, especially not like this.”

The NCAA has officially granted an extra year of eligibility for spring-sport athletes affected by the organization’s shortened seasons in... read more