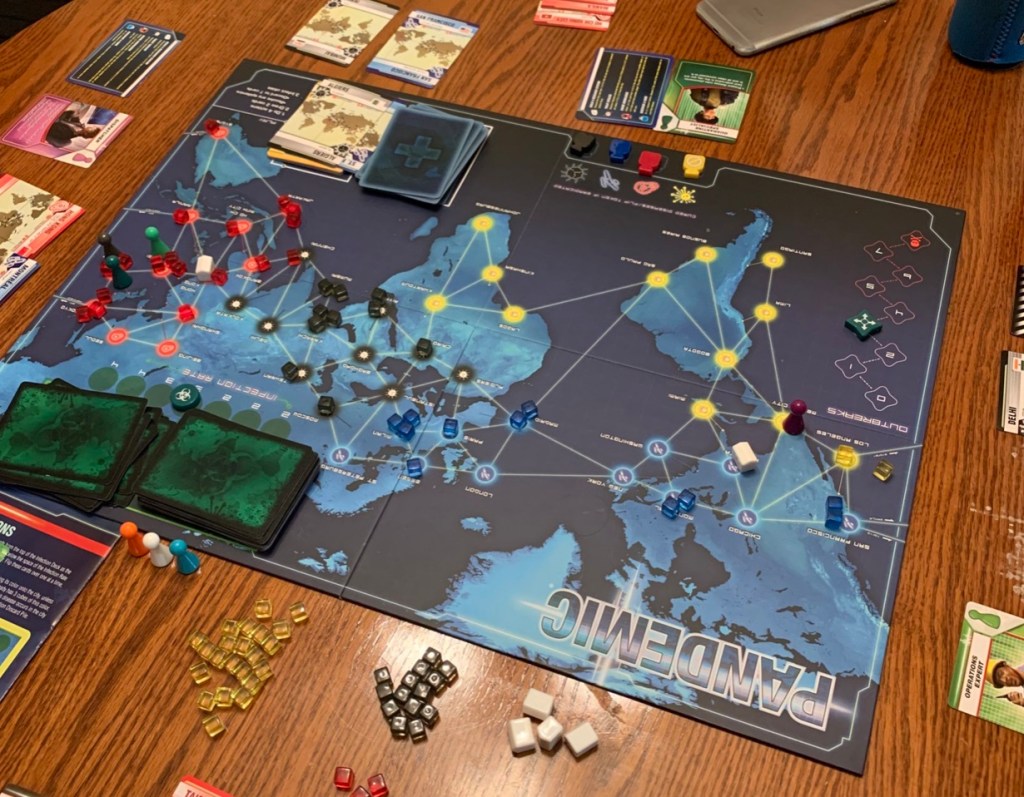 Yes, there is a board game named pandemic. Go save the world with your family (Photo by Nathanael Gabler)

I’m not one for pranks or really one for putting extra meaning on any day of the calendar for that reason, but this April 1 scared me. The entire news cycle for the past 23 days has seemed fascicle. We know it’s real, we know it’s serious, but it’s still just hard to believe all of this is happening.

Any news story that would have appeared to be clearly a fake April Fool’s Day escapade would be believable in these times. Mostly, this Wednesday, I was afraid that I’d be duped by a fake story or fake Twitter account canceling football.

Selfishly, I don’t want to imagine a world without football. Realistically, I’ve come to the conclusion that no one really knows when this pandemic is going to end. Both assuming there’s no doubt football will be played in September and saying there’s no way football will be played in September are both just ignorant things to say or assume. No one really knows.

As nice as that part of this is, for now we have no college baseball, no NBA, not much of anything going on sports-wise, period. So, instead of writing four baseball topics for every Friday Ole Miss series (this makes me sad), I’m going to be proposing four things a week for some positivity: a book suggestion, a podcast suggestion, an off-the-wall music suggestion and a weird story about how I’ve been killing time in the days of coronavirus, hence the coronavirus chronicles.

I’m a sportswriter, and this is in all essence a column in the sports section of a newspaper, so we’re going to try and keep things sports-related in general. However, I don’t really like being bound by rules – even ones I create for myself ­– unless there’s a good reason for them. So there will certainly be deviations from sports from time to time. Let’s have some fun and let’s get through this all safe and together.

Book: The Blind Side – Michael Lewis

Michael Lewis is the writer of Moneyball and of the Big Short, two other books turned into popular movies. With The Blind Side, Lewis tells the story of the evolution of football through the left tackle – protecting the blind side of the quarterback. Lawrence Taylor’s dominance off the right side of the defensive line in the 1980s essentially changed football strategy forever, as the game was also evolving into a more pass-heavy game. That emphasized the need for a more dominant, pass-blocking left tackle. The majority of the book tells the story of that evolution, using Oher’s story as one example.

Podcast: Geoff Schwartz is Smarter Than You

If you couldn’t tell from last week’s recommendation of the Ringer NFL Show, I’m a big fan of smart football podcasts. Geoff Schwartz is Smarter Than You describes itself by saying “former NFL offensive lineman Geoff Schwartz douses your hot takes with a cold bucket of reality.”

In reality, the show is just a great inside look of the game from someone who played it. Most football podcasts, most sports podcasts, are media personalities who spend a lot of time around the game. That’s valuable, but it’s interesting to get the perspective from someone who’s been there, especially when it deals with lower room dynamics or contracts or things of that nature.

Yes, the 90s rock band just released an album last week in the year 2020. Owners of one of my favorite albums of all time, Ten, Gigaton is Pearl Jam’s first album since 2013. Plus, it’s hard to beat Eddie Vedder’s voice. But really, any older band putting out new music is skeptical in my mind. I just default to assuming it’s going to be bad and am almost nervous to listen, fearful of derailing any good memories. This album is okay. It’s solid. It’s much better than the ‘older band puts out new music for the first time in a long time’ album. It’s different, and at least worth a listen.

“The ballads stretch out slowly, and the uptempo numbers are derailed by meandering build-ups, like stopping for a chat while running in place mid-jog,” Pitchfork staff writer Sam Sodomsky said in a review of the Album. “The band immediately forecasted an attempt to revitalize its sound. In context, it’s more of an outlier: a reminder of their underdog mentality, that they have some fight left in them.”

I’ve spent a lot of time doing this quarantine just thinking. One of the weirder, big picture, nerdy things that’s been going through my mind is how this will change us as a society. There’s going to be a lot of unintended consequences of this pandemic; a lot of things that we aren’t even thinking about are going to change, and that’s hard to predict.

No, I don’t think we’re just going to stop the societal norm of shaking hands. But there’s likely going to be some strange societal things that will be different. Is this going to change the way network TV operates? I’m not sure, but it’s one thing I’ve been thinking of a lot.

Network television has actually played a really cool role in this quarantine. This past weekend, FOX ran a simulated NASCAR race on their main network. It wasn’t actually simulated as much as it was esports. A bunch of NASCAR drivers and a few random celebrities quite literally raced virtually on FOX. Imagine trying to explain to someone, even two months ago, that this would happen. It’s wild.

Then, after the NASCAR iRace, FOX went straight into running old Super Bowls, and I kept watching. The Patriots 28-23 comeback over the Falcons in 2017 fed right into Aaron Rodgers’ masterful performance against the Steelers in Super Bowl XLV. The day before, I watched the 2008 Texas vs. Oklahoma game – Colt McCoy vs. Sam Bradford. I spent about six hours watching old home run derbies on ESPN this week.

Is this because I’m bored and crave sports in my life? Well, of course it is. But I think there could be some of this that might stay. The concept of FOX just running great, old football games during their normal Sunday slate during the summer when people miss football could be something that they realize gets enough numbers to maintain doing so long-term. Maybe people will continue watching iRacing. It seems unlikely, but who knows. Something different societally is going to come out of all of this. What it is is hard to predict, but it’s fun to try.

Oxford softball accepting the realities of their lost senior…