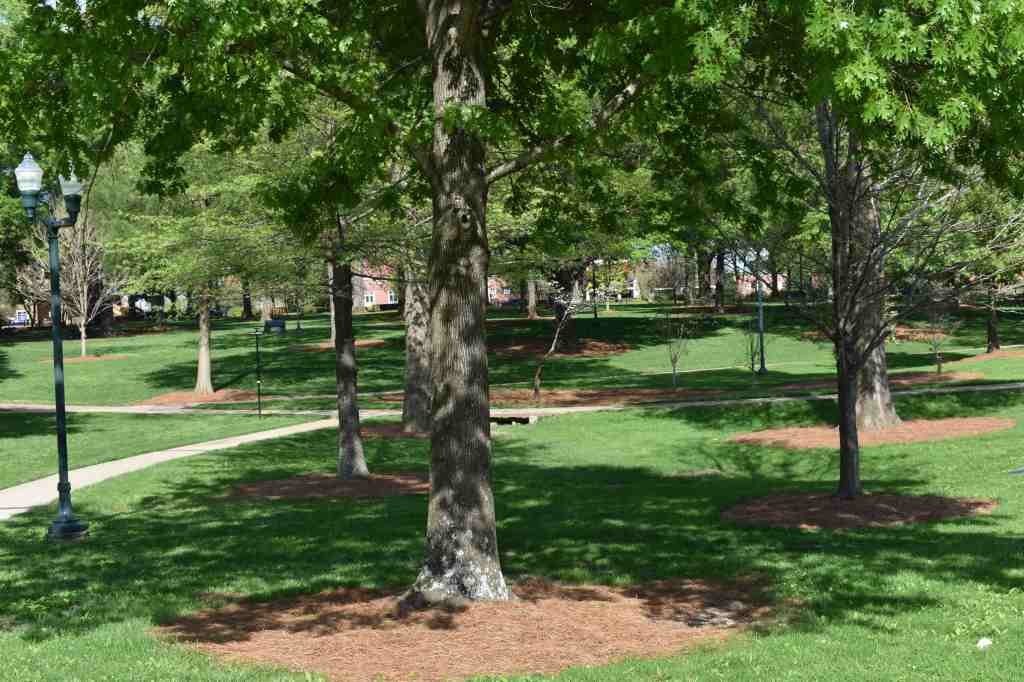 The Grove at Ole Miss, empty and desolate on a sunny Sunday afternoon in April (Photo by Nathanael Gabler)

I took a walk-through of campus this past weekend. At the same time, it looked both desolate and shockingly put together.

Oxford is simply different during the summer. Every May, nearly 20,000 students depart from the city in a move that seemingly cuts the population of the town in half. Driving the streets of Jackson Avenue at times over the summer can seem like we’re in this same pandemic every July.

That’s sort of what this walk through the Grove seemed like… summer. Yet it also seemed like a strange, desolate scene from the Walking Dead. Everyone was intentionally leaving space between themselves (or their families) and others. There was no public interaction. People would cross the street to the opposite sidewalk to avoid walking adjacent on crosswalks.

It was nice to see people obeying these guidelines, but at the same time, it really sucks that this is where we’ve come from. Technically, the Grove and other campus areas are only open for “limited use.” No one is stopping a family walking around or two people throwing a baseball or an individual running. However, put together a pickup football game and you’re certainly getting cited by the police.

Ole Miss’s campus is beautiful in April. Flowers around the Lyceum and the Old Taylor Road entrance to campus are in full bloom. It’s the normalcy of Oxford in the spring. Then you keep walking and the normalcy escapes, replaced by empty stadiums and empty parking lots. You can run for hours, looping through the Grove, and you might run into a couple dozen people. Maybe.

It’s just uncomfortable. I was looking forward to SEC baseball play, just from the journalistic perspective. Being a fan of a 16-1 team whose season gets catastrophically cut abruptly short? That’s a literal hell.

And that’s the reality we live in – some familiarities, a lot of uncomfortable adjustments.

We have no college baseball, no NBA, not much of anything going on sports-wise, period. So, instead of writing four baseball topics for every Friday Ole Miss series, I’m going to be proposing four things a week for some positivity: a book suggestion, a podcast suggestion, a different music suggestion (which we will bypass this week because I have a lot of baseball thoughts) and some strange thoughts or weird stories that have occurred to me during the days of quarantines, hence the coronavirus chronicles.

I’m a sportswriter, and this is in all essence a column in the sports section of a newspaper, so we’re going to try and stick to sports, as they say. However, I don’t really like being bound by rules – even ones I create for myself ­– unless there’s a good reason for them. So there will certainly be deviations from sports from time to time. But this week is not one of those times. Now let’s have some fun and let’s get through this all safe and together.

In the past 16 months, we have seen the inception of two separate inceptions of professional football alternatives to the NFL. The Alliance of American Football shut down its doors before the initial season ever finished. The XFL had its first season cut short amid the COVID-19 crisis. However, in the 1908s, we had an NFL alternative that at least survived for three seasons.

Football For A Buck tells the story of the USFL, a league that included some big name stars such as Herschel Walker and Jim Kelly and told some insane stories of wild bronco owners that couldn’t afford their players and a lot of crazy 80s drug use. The league was seemingly doomed from the start, yet it still lasted longer than some of its modern counterparts.

J.J. Redick was preparing for an NBA game when coronavirus shut down the league. The current New Orleans Pelicans guard has his own podcast, an interesting look inside basketball from a guy who not just played the game but is currently still in the league.

At the time the league was suspended indefinitely, Redick was in the locker room, ESPN on the television. When the tv cut to the Jazz-Thunder game with news that a player had tested positive for COVID-19. A few minutes later, he was walking to the court for shoot-around with the team’s PR guy when a memo came through that the league was suspended.

It’s a fascinating inside look at everything that went down, told right on his podcast, yet he’s still podcasting through everything that’s happening.

Major League Baseball is trying their best to play baseball this summer. A recent proposal that drew the support of public health officials included the plan of playing ball in what works out to be essentially a biodome in the Phoenix desert.

The plan forces all 30 baseball teams to relocate to Arizona, playing games in spring training facilities, at Arizona State and at the Arizona Diamondbacks’ Chase Field, all without fans. Players would also be forced to live and adhere to strict isolation patterns, promoting social distancing and essentially not seeing their families for the remainder of the season.

The payback for players: they’d get paid and professional baseball would be the first major American sport to return to play.

But could this work?

Step one is getting players to accept it. The part where they’d have to leave their families behind for months at a time would be a challenge, but if it’s the only way these guys would get paid in full, they may be open to it. However, would every player have to accept it? Guys like Mike Trout, who is expecting his first child in August, might be more opposed. Are we really going to play baseball without Mike Trout?

The fans part is a non-issue for me. For baseball to come back, there’s a zero-percent chance it would include fan attendance. Would it be weird as hell to watch game seven of the world series without any crowd noise or home fans? Of course. The adjustment would be strange. But I think most fans would be lying if they said it would prevent them from watching, especially in a time where this is all we’d have.

Downsides to this plan are numerous. What if one of the players comes down with the virus? What if that player is Aaron Judge or Bryce Harper or Jose Altuve? That’s completely oblivious to the point that most young, healthy people who contract coronavirus are completely asymptomatic. A random Kansas City Royals player could contract the virus and infect his entire team without many people knowing it until it’s too late. By then, had they all infected the opposition teams that they played days prior?

For argument’s sake, let’s say this is all logistically possible. We’ll assume that the plan is supported by the CDC and WHO and carried out to the best of one’s abilities. We have baseball. That’s dope. I’m pumped. But should we? Is that ethically and morally the right thing to do?

Theoretically, for this to work out, Major League Baseball is going to need to get their hands on a ton of COVID-19 tests. For baseball to safely take place, players are going to need to be tested regularly to make sure the asymptomatic carriers and don’t ruin the experiment. But how often is regularly? Is once a week enough? Right now, the tests are at a premium. Healthcare workers aren’t being tested once a week. In many places, healthcare workers aren’t being tested whatsoever until they’re symptomatic.

The counterargument is simple. People have always needed escapes from the real issues of the world. We’ve never really needed them more so than right now. If the baseball biodome experiment could work, it could change everything. We could have a sports league operating at full capacity a month from now. I’d be ecstatic.

But is that realistic? And more importantly, if it is realistic, is it something we should even be ethically doing? Those are the questions baseball needs to ask.