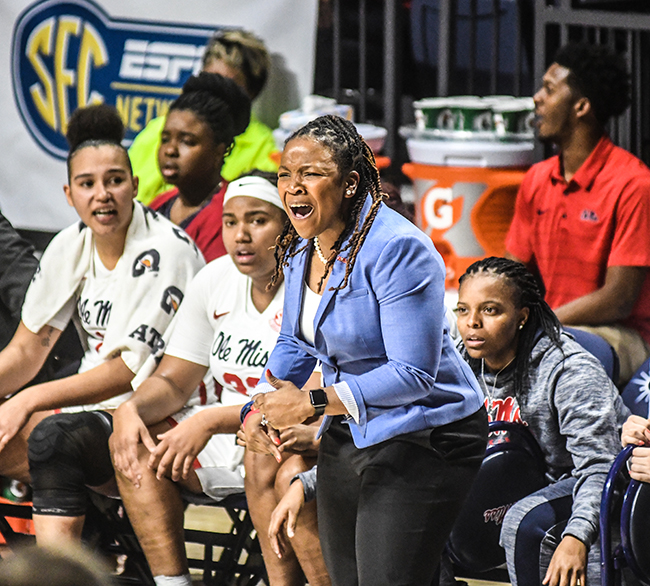 Mississippi head coach Yolett McPhee-McCuin reacts during the game against Mississippi State at the Pavilion at Ole Miss in Oxford, Miss. on Thursday, February 21, 2019. (Bruce Newman, Oxford Eagle via AP)

Despite a recent season in which the team went winless in Southeastern Conference play, the Ole Miss women’s basketball team inked the conference’s number one recruiting class for 2020.

In the words of the Rebels head coach, to win in the SEC, you’re going to need to have professional-caliber talent. Entering year three for head coach Yolett McPhee-McCuin, her ‘proof of concept season,’ the Rebels may have three such pros – one of whom the coach is comparing to one of the best women’s college basketball players ever.

Shakira Austin, a Maryland transfer and former No. 4 overall recruit by ESPN, will be showing up in Oxford whenever players are allowed to starting coming back to campus. Ole Miss signed two other five-star recruits in the 2020 class, with incoming freshmen Madison Scott and Jacorriah Bracey, but Austin may be the player to turn the Rebel program around.

“I don’t know if the SEC has seen a player like her since Candice Parker. She’s really, really good,” McPhee-McCuin said. “She’s an impact player and a quality person. She’s extremely skilled and there’s stuff she hasn’t even really done yet. We’re excited to have her. In the SEC, in the power-5, you have to have pros… and I think we have a potential pro in Madison Scott, our freshman coming in. I think (Georgia transfer) Donetta Johnson has a chance to be a pro. And of course, Shakira is a WNBA prospect.”

Barring the NCAA instituting a one-time transfer waiver, something they’re strongly considering passing during this summer, Austin will have to sit out the 2020-21 season. McPhee-McCuin joked about how she used to be against the passing of such a rule, but now it’s something she’s all for.

Austin played two seasons at Maryland, averaging 10.3 points and 8.4 rebounds over the two years. As a freshman, she broke the Maryland record for blocks in a single season with 89.

How serious of a WNBA prospect is Austin? McPhee-McCuin said that, upon her signing last week, three WNBA coaches contacted her immediately, saying they’re going to have to come to Oxford this season. If Austin lives up to what her coaches say about her, she could go as high as early in the first round, and according to McPhee-McCuin, potentially No. 1 overall.