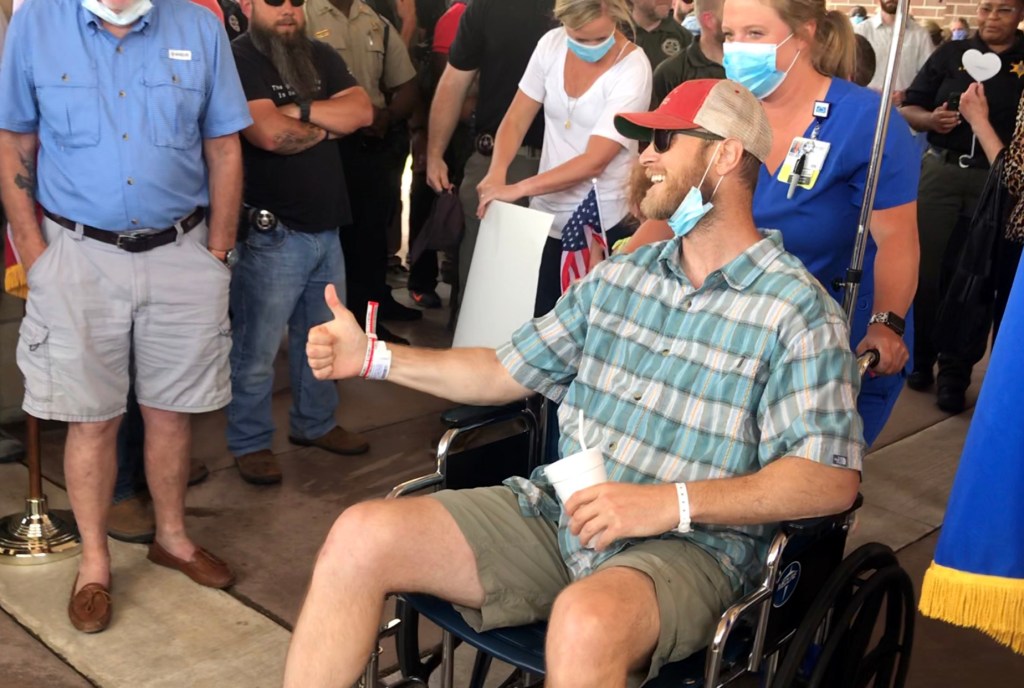 Baptist Memorial Hospital will be recognized and thanked by the U.S. Marshall's department for saving the life of Deputy U.S. Marshall Bob Dickerson.

Deputy US Marshal Bob Dickerson was doing his job when he was hit during a shootout on South Lamar Boulevard; seven days later, he left the hospital.

Dickerson left Baptist Memorial Hospital-North Mississippi on Friday after having emergency surgery to treat gunshot wounds from capital murder suspect Hunter Carlstrom. The incident occurred during a traffic stop that turned into a “scene from a movie,” according to witnesses.

Surrounded by nurses, doctors, family, friends and colleagues, Dickerson was greeted with applause, cheers and hugs from his family upon coming through the hospital’s back entrance doors.

“Thank y’all,” was all Dickerson could muster before emotions took over.

On May 15, Dickerson was part of a unit executing an arrest warrant for Carlstrom in connection with the May 7 murder of James Sartorelli in Arkansas. A pursuit began when Carlstrom tried to evade capture, and ended when his girlfriend’s vehicle was pinned in near the Azalea Drive intersection at approximately 11:30 a.m. that day.

Dickerson was rushed to the hospital nearby, while Carlstrom was pronounced dead at the scene after law enforcement officers returned fire.

The son of Marshall County Sheriff Kenny Dickerson, Bob experienced the support of every law enforcement agency in Mississippi who was on hand Friday to take part in the Hero’s Parade. The parade sent Dickerson up South Lamar Boulevard, through the Downtown Square and up North Lamar Boulevard, as people lined the streets to offer their appreciation and support for Dickerson.

US Senator Roger Wicker came to the hospital to offer his appreciation and support ahead of Dickerson’s release.

“This is a celebration, and really, what better time than Memorial Day weekend to be honoring one of our wounded warriors,” Wicker said. “Deputy Marshal Dickerson was wounded in the line of duty and this happens frequently. When someone raises their hand to be a law enforcement officer or a federal marshal or assistant marshal, they know, just like with our military, they are putting themselves in harm’s way. … Often times, we lose law enforcement officers in a situation like this. This is a matter of honoring somebody who has put himself in harm’s way.”

Carlstrom’s girlfriend, Xaveriana Cook, was charged with aiding and abetting in the attempted murder of Dickerson during a hearing in front of a U.S. Magistrate Court on Wednesday.