Written in Stone: What would it take to relocate the confederate statue on the Oxford Square? 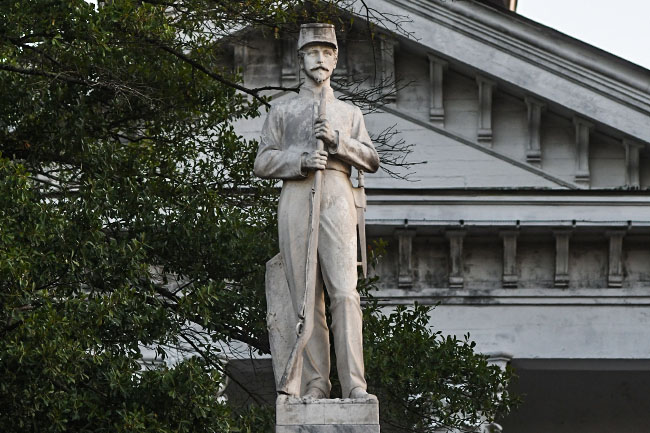 With attention long-focused on the confederate statue on the University of Mississippi campus, many Oxford residents are enquiring about the possible removal or relocation of the matching confederate monument on the Square.

The call to remove confederate statues comes in the midst of protests calling for racial equality, an end to police brutality, and justice in the recent deaths of Breonna Taylor and George Floyd, both of whom were killed by law enforcement officers.

Mississippi Code 1972 Annotated 55-15-81 dictates that “none of the following items, structures, or areas may be relocated removed, disturbed, altered, renamed or rededicated: Any Revolutionary War, War of 1812, Mexican-American War, War Between States, Spanish-American War, World War I, World War II, Korean War, Vietnam War, Persian Gulf War, War in Iraq or Native American War’s statues, monuments, memorials or nameplates (plaques), which any statues, monuments, memorials, nameplates (plaques), schools, streets, bridges, parks preserves, reserves or other public items, structures or areas of the state or any of its political subdivisions, such as, local, municipal or county owned public areas, which have been dedicated in memory of, or named for, any historical military figure, historical military event, military organization or military unit.”

However, it also states that “the governing body may move the memorial to a more suitable location if it is determined that the location is more appropriate to displaying the monument.”

Earlier this year, Mississippi senator Joseph “Mike” Seymour presented a bill that would prohibit the relocation of historical monuments. If approved, the amendment would “delete the authority of public governing entities to move historical monuments and memorial.” Senate Bill 2068, as it was known, did not pass.

The EAGLE contacted all members of the Board of Supervisors, as well as Tannehill and Representative Trent Kelly. District 2 Supervisor Larry Gillespie was the only person who responded, saying he had “no comment” on the matter.

As a result of the protests happening all across the U.S., Oxford resident Jonathan Kent Adams took to his Facebook page to encourage people to write to the Lafayette County Board of Supervisors to have the statue removed from the Oxford courthouse lawn.

The statue was erected in 1906 by the Daughters of the Confederacy to honor the soldiers that “gave their lives in a just and holy cause,” according to the plaque on its base. Adams said in a social media post that the cause was not just or holy, but rather a means to keep black people enslaved.

Last year, the Ole Miss Associated Student Body started the process to have the confederate statue on campus moved. This process came to a halt in January 2020, when discussion was tabled by the Institutions of Higher Learning Board of Trustees.