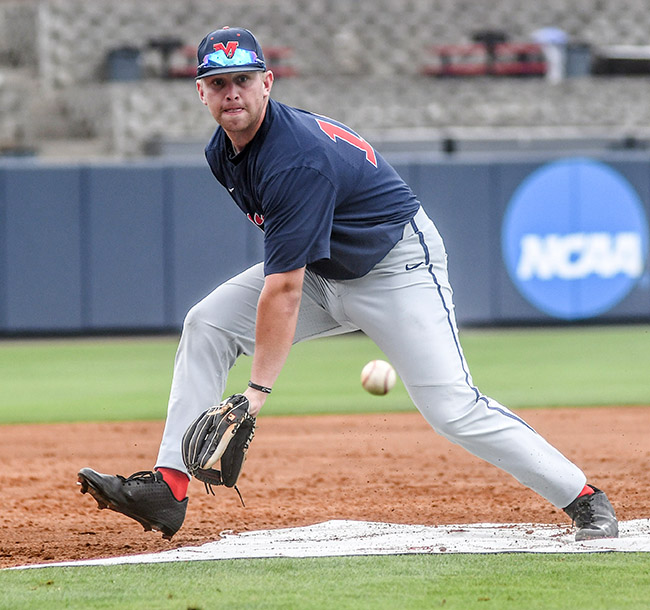 Mississippi third baseman Tyler Keenan fields a ball at baseball practice for the NCAA Oxford Regional, at Oxford-University Stadium in Oxford, Miss. on Thursday, May 30, 2019. Keenan was drafted by the Seattle Mariners in the fourth round of the 2020 MLB Draft on Thursday, June 11, 2020. (Bruce Newman, Oxford Eagle)

The Rebels’ left side of the infield is currently without its starters.

Ole Miss third baseman Tyler Keenan was drafted by the Seattle Mariners in the fourth round as the 107th overall pick on Thursday. Keenan joins teammate and shortstop Anthony Servideo, who was drafted by the Baltimore Orioles in the third round.

While it is likely Keenan will go, the slot value is $543,500, which could possibly give the junior out of Clayton, N.C., something to consider.

Much like Servideo, Keenan was excelling at the plate in his 2020 campaign with a team-best .403 batting average through 17 games. He also led the team with 33 runs batted in and in home runs with seven and also had five doubles.

Keenan had the third-best fielding percentage on the team at .929 to go, with 17 assists and nine put outs. He was drafted as a third baseman, but some experts project Keenan could shift over to first base and some point in his career.