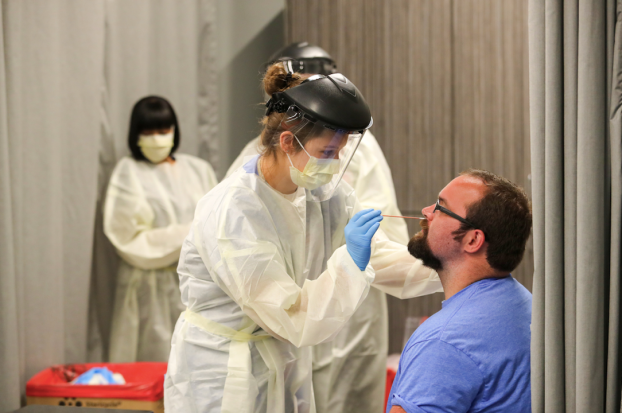 Ole Miss football player Eli Johnson is screened and tested for COVID-19 upon their return to The Manning Center on the Ole Miss campus on June 1st, 2020. Nine more players have been placed in quarantine due to contact tracing. (Joshua McCoy/Ole Miss Athletics.)

Reports came out on Sunday that more possibly more Ole Miss football players tested positive for COVID-19 and are now in quarantine.

Nine players are in fact in quarantined, but it is due to contact tracing from the two positive tests that came back from the June 1 testing. Shannon Singletary, Ole Miss associate athletic director for health and sports performance, confirmed this with the EAGLE on Sunday.

No additional positive tests have been reported since a student-athlete and a staff member in the athletics department tested positive when players returned to campus earlier this month.

On Sunday evening a spokesman with Ole Miss athletics confirmed a student-athlete and a staff member had tested positive, bringing the total number of confirmed positive cases to four since returning on June 1.

The nine players have entered the quarantine protocol due to being in close contact with the two people that tested positive.

The University of Mississippi has reported additional students who tested positive with COVID-19 in the past week, as they are required by law to do so, but Singletary confirmed with the EAGLE none of them are athletes or from the athletics department.

For two weeks, the nine players, along with the two positive cases will be quarantined from the rest of the team as they continue voluntary workouts. The players are staying in housing set up on campus by Singletary and his staff and are checked on regularly during the 14-day period. The staff member is in quarantine in their home in Oxford and is staying in constant contact with Singletary’s staff and doctors.

The COVID-19 pandemic is not ideal for any college football program, but for Ole Miss head coach Lane Kiffin and... read more