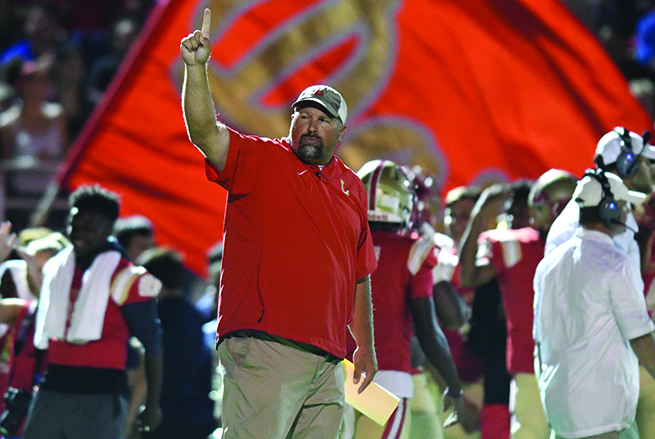 No matter what is decided by the Mississippi High School Activities Association later this month, the upcoming athletic season is going to look different.

During their meeting last week, the MHSAA’s executive committee discussed several options for the 2020-21 athletic year and changes that needed to be made due to the COVID-19 pandemic. One option that was a large topic of conversation was the proposed idea to swap the spring and fall seasons, shifting football into 2021.

The idea was not the first option, MHSAA executive director Don Hinton told the EAGLE following the June 30 meeting, but it was one of many on the table.

If the committee votes to move football to spring, it would bring baseball and softball into the fall portion of the calendar, along with the other spring sports.

The move would allow those sports who lost their seasons this year due to COVID-19 to have a shot at still playing in 2020, but some coaches said they do not expect that to be the outcome of MHSAA’s next meeting.

“First of all, I’ll say that that’s probably the last resort,” Oxford baseball coach Chris Baughman said. “I know they’ve got a couple other plans in place. They’re not going to flip seasons unless something changes. Honestly, when it was presented to me I was pretty receptive about it. First off, I am willing to do whatever it takes to get our season in and let these kids play. Even if that means the more viable option of pushing football to January and baseball to after spring break.”

Shifting the entire sports calendar back a couple weeks, or even a month, is a more likely option and would allow baseball to begin later in the spring season, which is something baseball coaches have favored in years past.

However, if the committee elects to swap sports, that also puts many schools across the state in a tough financial situation. Football, the largest revenue-generating sport, would not take place at the front end of the sports calendar as usual, how it is traditionally budgeted by athletic directors. Losing football in August could start a domino effect with the rest of the athletic programs.

“We know we need to play football from a monetary standpoint,” Baughman said. “Anybody that denies that is not in touch with any kind of reality.”

Larger programs, such as Oxford and Lafayette, would be alright if football is moved to the spring, at least for this year. But nearly every high school athletic program would feel the strain of losing revenue this year when it comes time to figure out their 2021-22 budgets.

If football is lost to the spring, Water Valley athletic director and head football coach Brad Embry said he thinks his athletics program will still be alright with spring sports going first.

“We’ll have to just do what we can to make things work,” Embry said. “Like most schools, football is a money-maker, but having said that, baseball at Water Valley does really well and if they put baseball first, and softball, they’ll do okay. We usually have really good gates, and so forth. It’s hard. There’s so many what-ifs, I don’t know what to say other than we need to be hitting the weights and get ready. … I just don’t know. This is unprecedented, and until you have a direction it’s hard to go anywhere.”

Even if the seasons remain in their traditional places on the calendar, the option of delaying the start of the football season could also have a negative impact on athletic programs, financially. Only the general concept of pushing the season back a couple weeks or longer has been presented, with no further details.

With key programs such as West Point and South Panola having to shut down workouts for two weeks due to potential COVID-19 exposure, and football’s preseason practices currently scheduled to begin in less than a month, pushing football back a few weeks seems like a viable option the committee will choose.

The problem is schools like Lafayette, which has a 2020 football schedule that is skewed toward more away games and less home games. Because the Commodores moved their game against New Hope to William L. Buford Stadium last season, due to heavy rains affecting New Hope’s field, it altered this season’s schedule. Lafayette has only four home games this year, with two of them in the first two weeks of the regular season.

“(Losing games) could definitely affect us,” said Lafayette football head coach Michael Fair. “You’re talking about cutting half of our home games if we push it back and don’t play those first two games. Those are all things that have to be discussed. Certainly, nothing is concrete right now, but different things that we just really need to discuss before we get to that point.”

The MHSAA executive committee is scheduled to meet next on July 14.