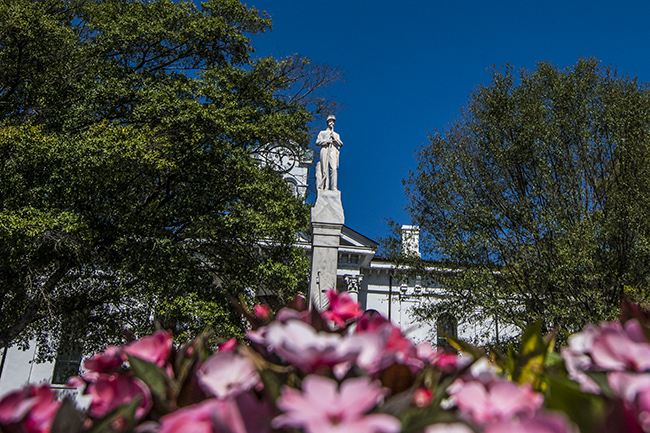 The issue of rightful ownership over the Confederate statue located on the Square continued last week.

In a response to a letter sent by the Oxford Board of Aldermen that questioned whether Lafayette County owned the property where the statue resides, the Board of Supervisors asserted the county did indeed have ownership.

“Based on our review of all available records, and noting the reality that both County and City have always regarded these areas as within the County’s ownership and exclusive jurisdiction, the County firmly believes it owns the Public Square area, including the area where the memorial is located, and sees no reason to further belabor an issue it has already decided,” the Supervisors’ letter read.

The EAGLE obtained a copy of the letter through a public records request with Oxford’s City Hall.

The letter, dated Sept. 8, claims they reviewed all the points raised in the Aldermen’s Aug. 18 letter where the city questioned who rightly owned the property. The Supervisors also referenced the timing of the city’s letter, which also asked to meet with the county to discuss the issue in person in a formal, or informal, setting and to inform the city of their decision regarding that request by Sept. 15.

“As an initial matter, the Board strongly questions the timing and motives behind the City’s decision to raise questions concerning the ‘ownership’ of the area where the memorial is located,” the letter reads. “As the City is aware, the Lafayette County Board of Supervisors has exclusively controlled and managed the use of the area around the memorial, as well as the remainder of the Courthouse grounds, for a number of years without any involvement by the City.”

The letter continues to say the areas in question have been “mutually regarded” as part of the areas owned by Lafayette County and within its “exclusive” jurisdiction ever since the Lafayette County Courthouse was reconstructed in 1871 and 1872.

“At no time did the City question the County’s ownership and jurisdiction, until now.” the letter read.

In May of 1868, the Lafayette County Board of Police, which preceded the Board of Supervisors, conveyed “that portion of the County property known as the Public or Court Square” to the governing authorities of the Town of Oxford “in fee simple forever.”

In the aforementioned agreement, the conveyance called upon the Town to repair, maintain and apply its ordinances to the Square. The agreement also hinged on the Town of Oxford to convey the property back to Lafayette County if it requested the same for construction of a new courthouse, provided the County repaid the Town for it’s expenses in repairing the Square.

The Supervisors’ letter references the public forum they held on June 22 where members of the community voiced their opinions in favor of, or against, relocating the statue from its current location on the south side of the courthouse. The Supervisors then held a vote during their July 6 meeting that was not on the agenda. They voted unanimously to keep the statue where it currently resides.

“Dissatisfied with the Board’s decision, those seeking to press the memorial’s relocation in other ways and forums approached the City,” the letter continued. “Reacting to what it openly acknowledges as political pressure, the City professes to raise the issue of “ownership” of the memorial and the area where it is located and, by doing so, attempts to introduce a ‘legal’ issue, motivated by purely political expediency, where a legal issue of ownership simply does not exist.”

The Supervisors go on to claim the timing of the city’s July and August letters “undermines” the relationship between the City of Oxford and Lafayette County “to the detriment of our community, and needlessly adds to the associated costs and other resources already spent on this issue.”