Lafayette bounces back with win over Grenada 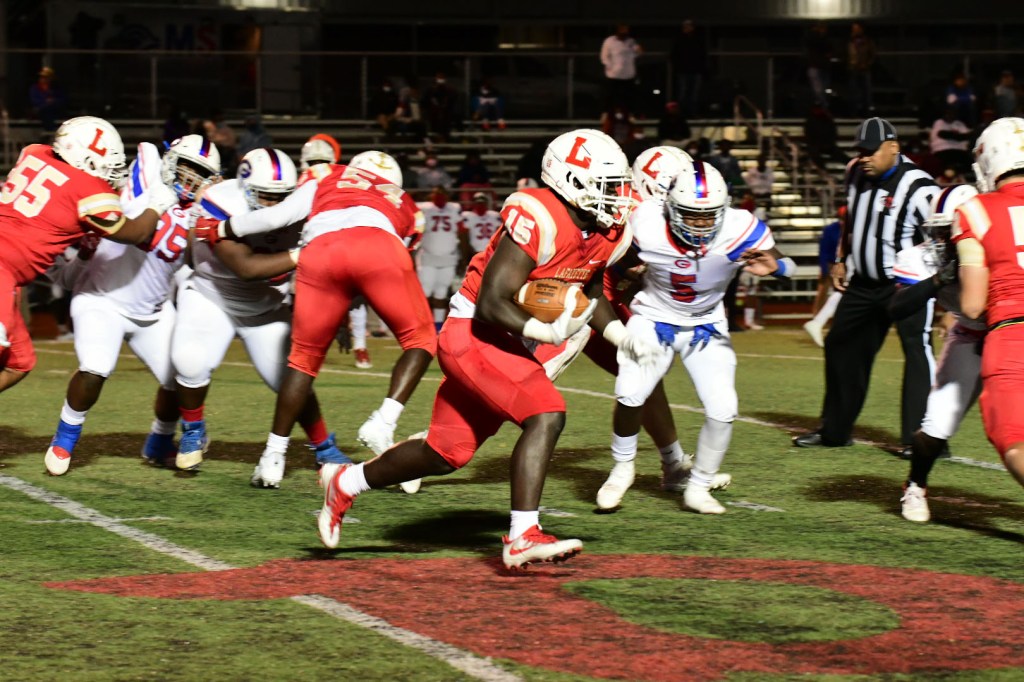 Tyrus Williams threw an interception on the first play of the game, but that was the only major mishap the rest of the game.

In what was a true homecoming for Lafayette, who played on their home field for the first time all season. The Commodores defeated Grenada 35-14 at William L. Buford Stadium on Friday.

“It felt great out here tonight,” said Lafayette head coach Michael Fair. “Great atmosphere since we were able to sell a few more tickets. I thought the crowd was good.”

Governor Tate Reeves expanded the maximum allowed capacity at high school football stadiums from 25 to 50 percent earlier in the week.

Crucial mistakes were what doomed the Commodores (3-2, 1-1 1-5A) in their loss at West Point last week. Friday’s performance was much cleaner and was the Commodores controlled on the ground all four quarters.

Williams bounced back after the opening interception, throwing three touchdown passes that included a 48-yard pass to Kylen Vaughn midway through the second quarter.

“We’re close,” Fair of his offense. “That’s the thing. We turned the ball over some. We had some drive-killing penalties that we’ve got to clean up. I think you could kind of see a little bit tonight what (Williams) is capable of. When he’s got protection, we’ve got some guys who can find open spots and catch the football.”

The ground game excelled for the Commodores, led by Jayden Reed. The sophomore running back put the Commodores on his back, rushing for over 100 yards and a touchdown.

Reed’s touchdown came on an 80-yard scoring drive in the second quarter, which saw him account for 75 of those yards on the ground.

Brendan Toles put Lafayette on the board first with an 8-yard end around run that include two reverse tosses in the backfield.

Grenada (2-2, 1-1) failed to keep pace with the Commodores early, missing two field goal attempts of 41 and 36 yards, respectively. The Chargers did manage to get on the scoreboard with touchdowns passes in the second and fourth quarters.

“Our defense bailed us out on a couple short fields that we gave them tonight,” Fair said. “Our defense is built like that and our offense, the way we’re doing things, we’ve got to take some chances and we did that tonight. We were really emotional, I thought, playing at home. I thought that was great. You’ll take a few mistakes, especially from a young ball club, because you know you’re going to get effort.”

Lafayette hits the road again next week to begin a four-game road trip. The Commodores travel to Center Hill on Friday. Kickoff is set for 7 p.m.