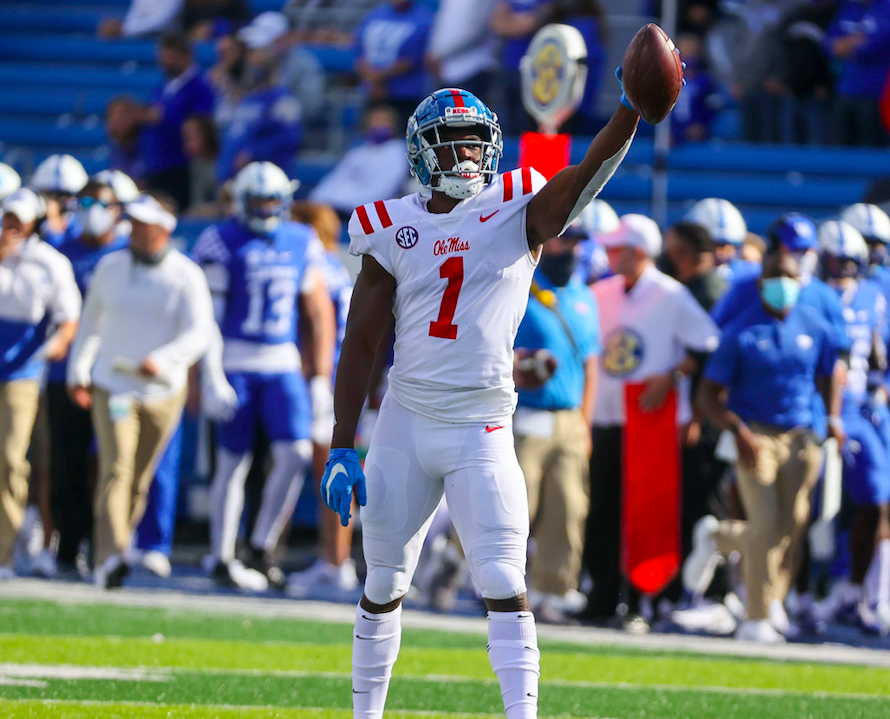 Ole Miss reciever Jonathan Mingo holds the ball up after making a reception during the Rebels’ game against the Kentucky Wildcats at Kroger Field in Lexington, Ky. on Saturday, Oct. 3, 2020. (Joshua McCoy/Ole Miss Athletics)

Last Saturday, Jonathan Mingo finally had the game he and a lot of others expected him to have a year ago.

The sophomore wide receiver caught eight passes for 128 yards and two touchdowns, all career-highs. Mingo looked to solidify himself as the number two option for Matt Corral behind Elijah Moore in the Rebels’ 42-41 overtime win at Kentucky.

The breakout performance was not a surprise to Ole Miss head coach Lane Kiffin, who knew the Brandon native just needed the right moment and opportunity to showcase his talent.

“(Mingo) had a great camp. The ball just didn’t go to him last week,” Kiffin said after Saturday’s game. “People are going to figure it out and start doubling up Elijah. So, Jonathan stepped up.”

Mingo and Corral looked to have good chemistry against the Wildcats defense. The sophomore quarter back attributes that to how Mingo carries himself in the locker room and in the receivers’ room.

“Mingo is a young guy but when he came in, he came in with a work ethic and that starts to rub off,” Corral said. “All those guys are hard workers and it rubs off. Those guys as a unit, all way down to Drummond, Dannis Jackson, Braylon Sanders, all those guys. They really put in the work and I think weekly it’s going to change on who’s going to show out.”

Deane Leonard is settling in quite nicely to his new home in Mississippi.

The transfer from Calgary has adjusted to a Southeastern Conference defense, but the bigger acclimation was going from Canada to Mississippi.

The transition became much easier for Leonard once he learned his transfer waiver had been given the rubber stamp of approval by the NCAA and the SEC. There was drama for Leonard leading up to hearing the news, which was not delivered to him by Kiffin until hours before the Rebels’ season opener against Florida was set to kick off.

“I found out Friday afternoon,” Leonard said. “I remember I came to the practice facility for kind of a walk through. I went home, didn’t hear anything. I was kind of confused at that point as I didn’t know if I was playing or not at that point. Kiffin told me to come back up to the stadium at like (3 p.m.) and told me I was cleared to play. I was just ready to go by then. I kind of approached the week with the mindset that I was going to play, so it wasn’t too much of a change. But it was good to hear.”

Another potential key piece of the Rebel defense is still waiting to hear from the people in Indianapolis. Otis Reese has yet to receive any word on his transfer waiver, nor has Kiffin. League commissioner Greg Sankey announced they had approved all transfer waivers, but Reese still needs final approval from the NCAA.

Having gone through the process, but now able to play, Leonard can relate to some of what Reese is going through, now three weeks into the season.

“It’s pretty frustrating,” Leonard said of Reese’s situation. “You go to practice everyday and you give it your all but you don’t know if you’ll actually be able to go out on to the field. For Otis, I really hope that he really gets the opportunity to play this season. I really do feel for him. I read his story about how he left Georgia and I really hope the NCAA makes the right decision.”

Ole Miss now knows what time their second road game of the season will kickoff.

The SEC announced television times for all games on Oct. 17, including the Rebels’ game against Arkansas in Fayetteville, on Monday.

The Rebels and Razorbacks, who are coming off their upset win over then No. 16-ranked Mississippi State, will kickoff at 2:30 p.m. CT and the game will air on ESPN2.