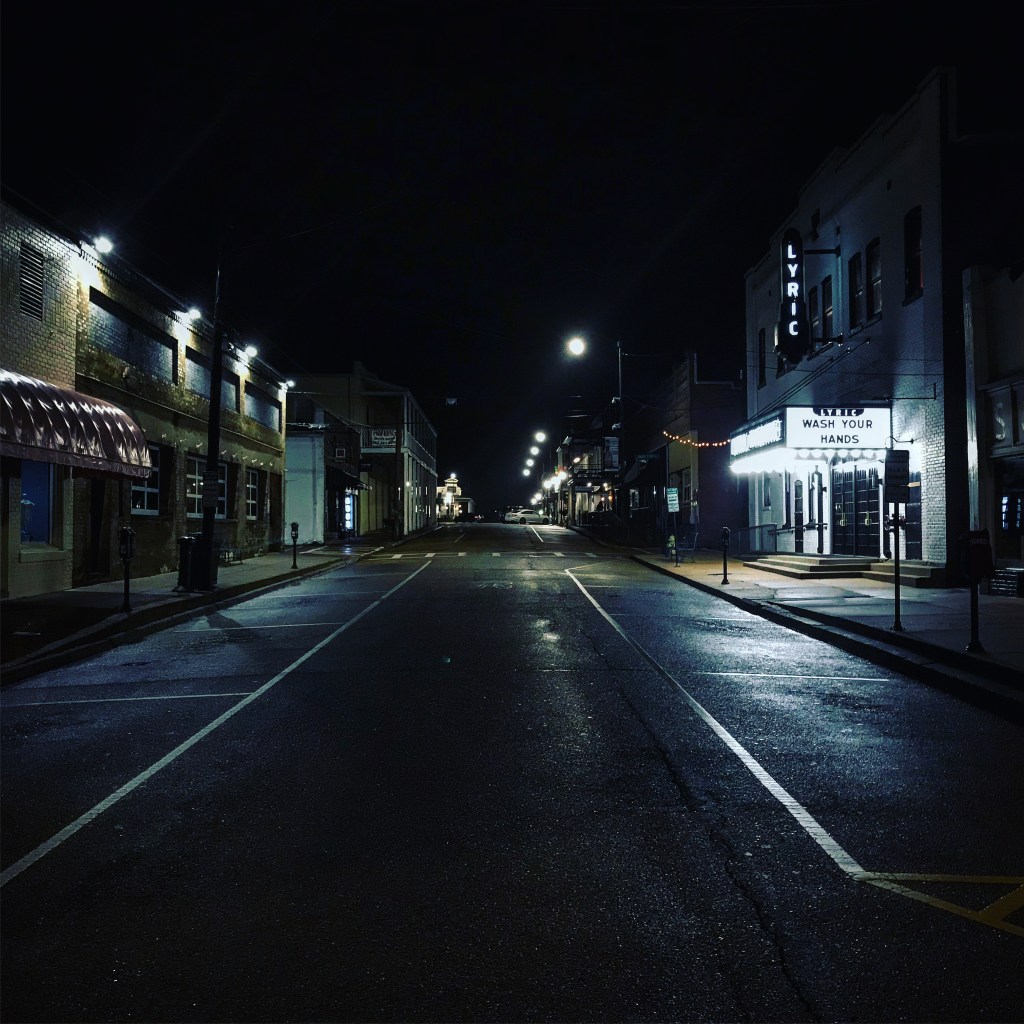 Van Buren Avenue, and the rest of the Downtown Square, sits quiet on Friday night as Oxford residents are staying at home, practicing social distancing, due to the COVID-19 pandemic. Lafayette County has five confirmed cases as of Monday, according to the Mississippi State Department of Health. (Jake Thompson/Oxford Eagle)

Editor’s Note: This is the first installment of our four-part series, taking a look back at some of the most notable stories of 2020.

The year 2020 will go down as the most unpredictable years in modern history, a year that changed the course of the country for many reasons.

A pandemic struck and essentially shut the entire world down for months, and in some places, continues to be shut down. The first three months of this year started out relatively normal for Oxford and Lafayette County, but March brought about a new way of life.

Before COVID-19 took over everyone’s lives to close out the first quarter of 2020, there were a few newsworthy moments in Oxford and Lafayette County.

The most notable is the City of Oxford officially selecting Jeff McCutchen as its permanent Chief of Police. On Jan. 6, McCutchen was officially sworn in as the next chief of the Oxford Police Department.

The ceremony was merely a formality, as McCutchen had been serving as the interim Chief of Police the previous 10 months, taking over for Joey East, who stepped away to campaign to become Lafayette County’s next sheriff. East won the sheriff’s election, taking over the post his father, F.D. “Buddy” East,  held for 42 years.

“Even in the command staff role, you think you understand the stress of that job, but then you get in that seat and you have no idea,” McCutchen said of taking over as police chief. “If you can’t sit there and feel that pressure, you can’t describe it to anybody else. … That’s a hard pill to swallow sometimes, to think in that realm that everybody that you’ve got your eyes on, they expect you and your staff to be a cut above and to protect them. But also do it the right way to where they’re connected to you. That’s a big role.”

Christi Hardy would tell her husband she would become the mayor of the Town of Taylor someday — she just did not know it would be this soon.

Hardy won a special election on Dec. 17, 2019 to become the town’s next mayor. She was officially sworn in on Jan. 7. The election was to fill the post suddenly left vacant by Jim Hamilton, who announced his resignation as Taylor’s mayor in November of last year.

Hardy’s grandfather served on Taylor’s Board of Aldermen for several years, and she said the idea of getting into local government was appealing to her. When she and her family moved to Taylor five years ago, she began contemplating how to achieve those goals.

“I said, ‘I’ll start out lower and then I’ll work my way up,’” Hardy said. “Then when Jim resigned and I didn’t know any of the people who were running, I thought, ‘Well this is my time,’ because I want to make sure Taylor is taken care of. I don’t want somebody to come in and mess it up.”

Hardy will finish up the remaining 18 months of Hamilton’s term and will then begin plans to run for re-election in 2021.

The new decade got started with a championship celebration at Lafayette High School with the girls’ soccer team winning the Class 5A state title in early February for the second straight season.

The Lady Commodores defeated East Central 2-1 in dramatic fashion at Brandon High School on Feb. 8. After coming from behind to beat region rival Saltillo in the North Half title match, Lafayette’s character shined through once again five days later.

Lafayette’s Julia Perkins gave the Lady Commodores the early lead with a goal in the 10th minute, but the lead was short lived as East Central answered with a tying goal in the 20th minute. Then seventh-grader Caroline Perkins answered in the 57th minute with what became the winning goal.

The win provided the program its third state championship since 2015.

In mid-March, the COVID-19 pandemic hit Mississippi, with the first case reported on March 12 followed by the first reported case in Lafayette County on March 19.

Three days after the first case was reported, Oxford’s Board of Aldermen approved a “Stay at Home” resolution, requiring all non-essential businesses to close. Quarantines and working from home became regular daily routines for Oxford and Lafayette County residents.

While the Downtown Square is normally bustling on weekends with Ole Miss baseball bringing large crowds in the spring, the Square was a desolate ghost town. The pandemic brought Oxford to a standstill.

Masks and facial coverings became mandatory, and still are as the calendar turns to 2021. Social distancing became the phrase of the year.

Schools were on Spring Break when the pandemic arrived, but students didn’t see the inside of their classrooms the rest of the 2019-20 school year as virtual learning took the place of in-person instruction and Zoom classrooms were how students finished out their spring semesters.

The University of Mississippi even closed its doors after Spring Break, shifting to virtual learning. The 2020 Commencement was postponed due to social gatherings being prohibited as the COVID-19 virus became easier to spread in large groups.

Birthday parties and other celebratory occasions became events where drive-by car parades in front of homes, holding up signs and waving to the guests of honor while they stood in their driveways. The simplest of tasks were altered drastically, and it would be months before some semblance of normalcy would return.