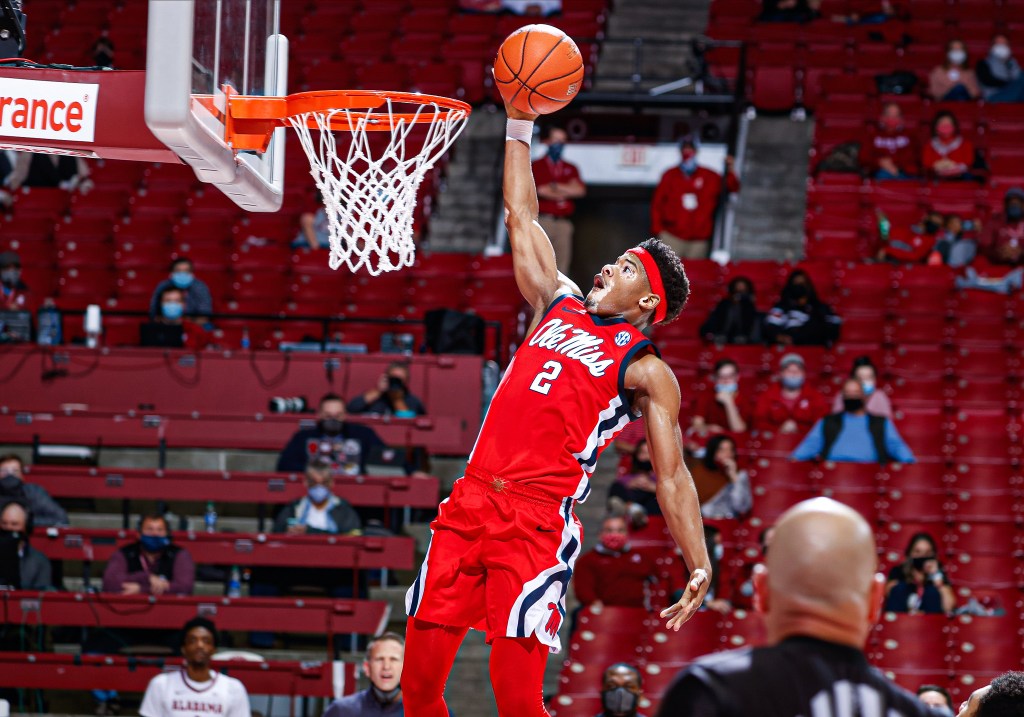 Ole Miss point guard Devontae Shuler (2) attempts a shot during their game against Alabama at Coleman Coliseum in Tuscalooa, Ala. on Tuesday, December 29, 2020. The Rebels are still searching for consistent offense after a 82-64 loss to open up conference play. (Ole Miss Athletics).

Tuesday’s Southeastern Conference opener did not go according to plan for Ole Miss.

The Rebels traveled to Tuscaloosa to take on Alabama at Coleman Coliseum and left with an 82-64 loss. It was not a performance worth remembering, as the Crimson Tide jumped out to an 8-0 lead and never looked back.

In what was the third true road game for the Rebels (5-2, 0-1 SEC), more than any other SEC team this season, they struggled defensively and allowed the most points by an opponent this season. It was only the second team to score more than 60 points against them through seven games.

“Start to finish we could never get the dribble under control, defensively,” said Ole Miss head coach Kermit Davis after the game. “The times that we had a chance, second half, we couldn’t rebound, timely balls, 50/50 balls. Just really disappointing how we defended the dribble, protected the rim. Not a lot of good things tonight.”

Struggles on the offensive side of the court continued to plague the Rebels on Tuesday. They shot a meager 33.8 percent (22-of-65) from floor against Alabama, including going 1-for-13 from behind the three-point line where they closed out the game missing all seven of their attempts in the second half.

Devontae Shuler had his worst game of the season against the Tide. The senior scored eight points, shooting 18 percent (2-for-11), and was 0-for-4 beyond the arc. Despite Shuler’s performance, the Rebels did manage to have three players score in double-figures in Romello White (20 points), KJ Buffen (15) and Jarkel Joiner (12).

Shuler and White each hit the 1,000-point mark for their careers during Tuesday’s game.

Before the season began, the slow start for the offense was something Davis had his eye on during preseason. Since being shutdown for two weeks at the start of the season due to positive COVID-19 cases within the program, the Rebels have played enough games to have gotten their conditioning back into game-shape.

When Ole Miss got to within six points in the second half and poised for a comeback and to potentially take their first lead of the game, missed opportunities occurred once again. Missed free throws and three-point attempts allowed the Crimson Tide to stretch their lead back out to a comfortable margin.

“We didn’t shoot it great in the preseason,” Davis said. “We just didn’t. I told my staff a couple months ago, way back, even before the COVID pause and everything, that I was really started to get concerned. But Matthew Murrell and these guys, we’ve got to tell them to play with confidence. The biggest concern is we gave up 82. That was the biggest thing. We could never get them under control.”

Ole Miss now turns its attention to Saturday where they return home to step out of conference play one last time. They host Wichita State (5-2) at 6 p.m. and the game will air on ESPNU.