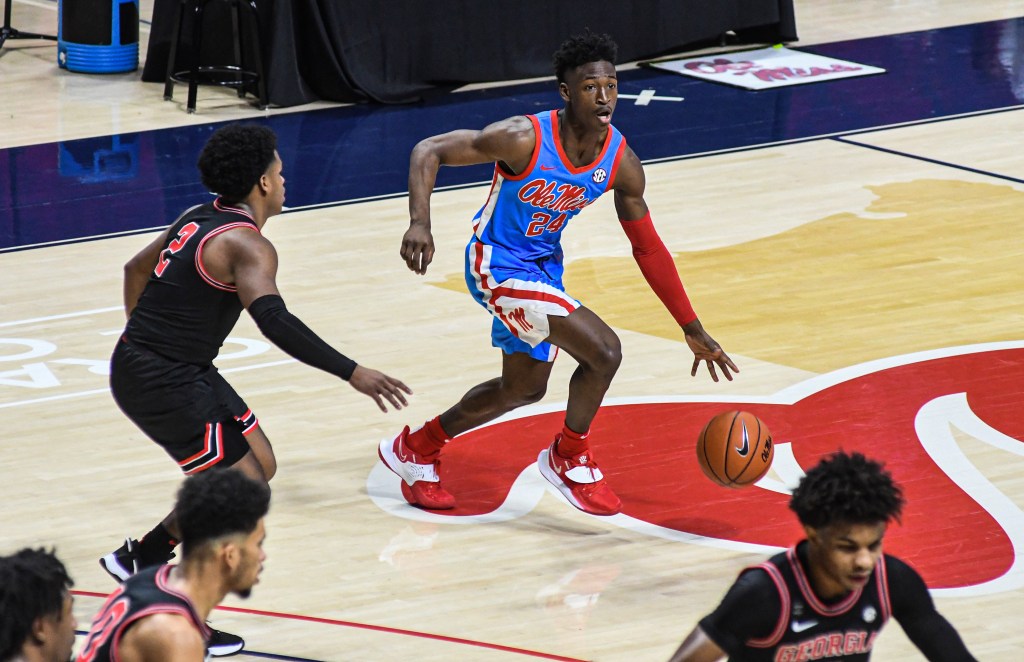 Lacking offense for most of the game, the Rebels fell to Georgia, 78-74, at The Pavilion on Saturday. The loss was the third straight in conference play and fifth in the last six games for Ole Miss.

An inability to hit three-point shots and struggles at the free throw line plagued Ole Miss (6-6, 1-4 SEC) in the first half. A basket by freshman guard Matthew Murrell at the 9:50 mark in the opening half was the only three-pointer for the Rebels, who shot just under eight percent (1-for-13) from beyond the arc in the first 20 minutes.

The Rebels went 1-for-7 at the free throw line in the first half.

“We started out shooting the ball really well from the free throw line (to start the season) and it was just abysmal,” said Ole Miss head coach Kermit Davis. “Robert Allen really struggled form the line. Romello (White) has really struggled at the line. …We’ve got to do a better job there.”

Ole Miss fared better in the second half, offensively, shooting 66.7 percent (6-of-9) from the perimeter and 58 percent from the floor overall. Led by a strong 20 minutes by Devontae Shuler and Jarkel Joiner, the Rebels to within three points in the final minutes but were unable to complete the comeback.

Joiner scored 22 points, a new career-high as a Rebel. Shuler finished with a team-high 24 points. The duo combined for 34 points in the second half.

“Coach (Davis) and the coaching staff and especially my teammates, they’ve always had confidence in me,” Joiner said. “They just tell me to, ‘Keep shooting the ball. Keep shooting the ball.’ A lot of hard work, especially in the offseason. When I had to sit out I put in a lot of hard work. I just never got down on myself and just kept shooting. Kept playing the game.”

Ahead of Saturday’s game, Davis spoke about the need for his team to control the rebounding stat more than they have been in recent games. He also mentioned Romello White specifically, stating his graduate transfer forward needed to improve his rebounding game.

The Rebels answered the call, winning the rebound battle against Georgia (8-4, 1-4) 33-24. Unfortunately for Ole Miss, the Bulldogs did not give them many chances to pull down a rebound in the second half, shooting 75 percent. For a stretch, the Georgia was shooting over 83 percent in the final 20 minutes.

“I think we had a few shots that didn’t fall that effected us, defensively,” Davis said. “They just popped us. We couldn’t stop the dribble. Couldn’t guard around the goal. We got a group in there in the end that made a great effort, got it to a one-possession game. But it was too late.”

Ole Miss hits the road for a game at Mississippi State on Tuesday at 8 p.m. CT. The game will air on SEC Network.