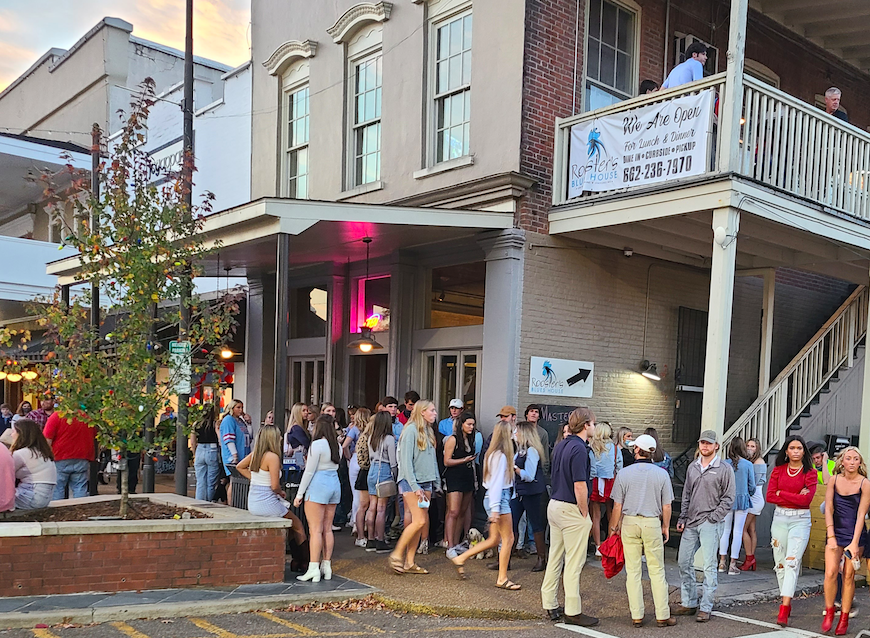 The Oxford Board of Aldermen voted on Monday to reinstate the outdoor mask mandate after receiving several calls about crowds of people waiting in lines outside bars on the Square. (M. Ben Williams)

People waiting outdoors in lines to enter bars and restaurants in Oxford must now wear a mask.

During a recessed meeting on Monday, the Oxford Board of Aldermen voted to reinstate their mandate requiring masks to be worn outdoors when social distancing is not possible.

During their Aug. 4 meeting last year, the Board voted for the same mask mandate due to crowds gathering at establishments located on the Downtown Square. The Board later removed the mandate when they voted to follow Governor Tate Reeves’ COVID-19 executive order, in totality. Reeves’ executive order does not require masks to be worn outdoors.

Oxford Mayor Robyn Tannehill noted she, and the aldermen, received multiple calls and emails regarding large gatherings of people not wearing masks over the weekend around the Square. The mandate took effect on Tuesday.

Oxford’s mask mandate while indoors has remained in effect since the Board passed it last April.

“We’re not going to 100-percent compliance; we don’t with any of these regulations that we’ve put in place,” Alderman Janice Antonow said. “But if we get 50 percent of the people to do it because someone tells them to put their mask on, we’re still making a difference in the spreading of the virus.”

The owners and staff of each restaurant and bar will responsible for making sure people in line outside to patronize their establishment have a mask or facial covering on. Masks are required indoors, unless seated at a table.

The Board also approved a mask mandate for the Ulysses “Coach” Howell Activity Center’s walking track. Between 1 p.m. and 2 p.m., those using the walking track on the second floor will not be required to wear a mask while doing so.

Lafayette County reported 40 new cases as of 6 p.m. on Monday and have 394 active cases as of Jan. 25. Over the weekend, Lafayette County crossed the threshold of 100 deaths due to COVID-19 complications. As of Tuesday, there have been 101 deaths reported since March 19 of last year.