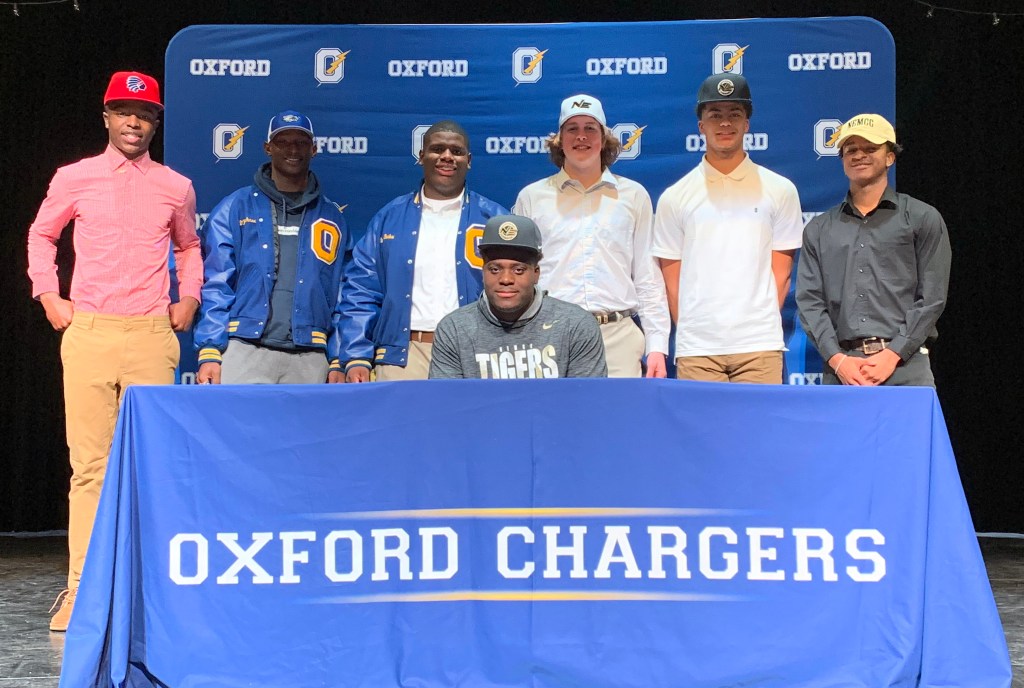 After three Chargers signed with schools in December, seven more signed on Wednesday with North Mississippi Junior College programs to make 10 players continuing their football careers at the next level.

Being the second National Signing Day for the Class of 2021, Feb. 3 is the first day high school seniors can sign with a JUCO program.

“I think those guys are excited to have the opportunity to go play together somewhere,” said Oxford head coach Chris Cutcliffe. “They’re great friends, and when they had that opportunity, they jumped on it.”

Oxford’s wide receiver corps was a potent group led by Jalen Webb, who signed with Itawamba Community College. Webb led the Chargers with 545 receiving yards and caught three touchdowns. Wortham led the team with 17 touchdown receptions and hauled in 37 catches for 519 yards.

DK Johnson, who signed with Co-Lin Community College, came on strong at the end of the season with 434 receiving yards and three touchdowns. At the tight end position, Brannon finished with five touchdowns and 139 yards on 10 receptions.

“They made play after big play last season for us in really big games,” Cutcliffe said of his receiving group. “In big moments they showed up and made plays. A great group of young men and I think they left a positive impact on our receiving corps moving into the future.”

A pillar of Oxford’s stout defense, Sims recorded 36 tackles in 2020 and finished with 86 tackles in his career as a Charger. Sims also finished his time at Oxford with 7.5 sacks and 25 quarterback hurries.

Becoming one of the top long snappers in Mississippi, Wilfawn also spent time at tight end, where he recorded his first career touchdown during the 2020 Class 6A state championship game against Oak Grove in December.

With Oxford’s 10 signees in this recruiting class, it will mark 41 Chargers who have continued their careers at the collegiate level in the last five years.

“It’s a testament I think to our coaching staff, our assistant coaches and what they do developing our guys,” Cutcliffe said. “I think it’s also a testament to our school, academically, and what our guys have done to get to this point.”