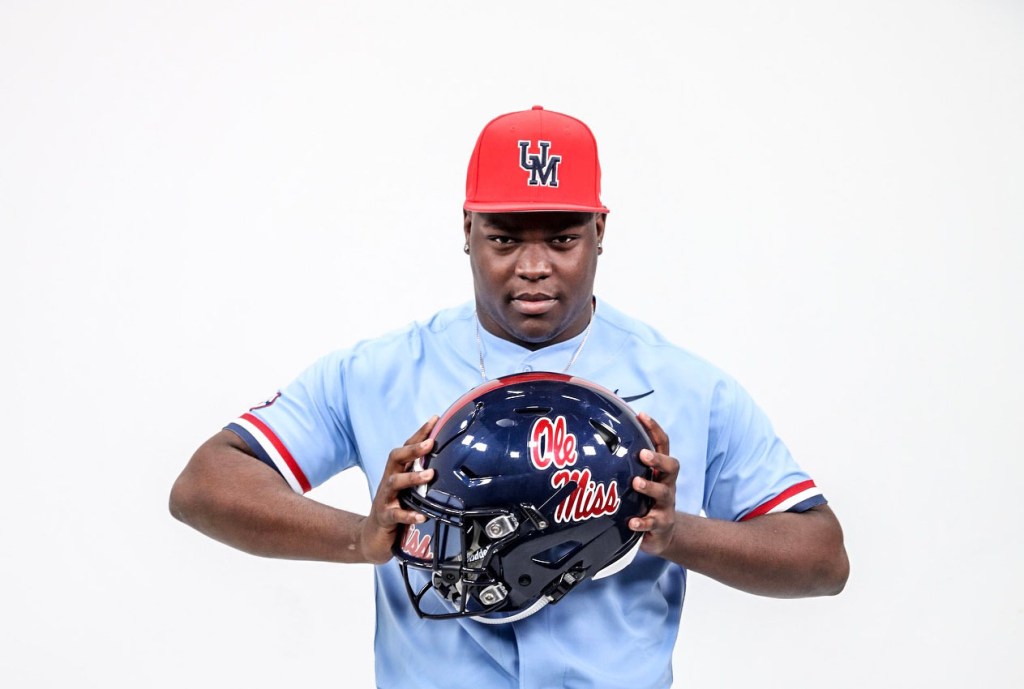 Four-star defensive tackle Tywon Malone signed with Ole MIss on Wednesday, February 3, 2021. Malone, who also plays baseball, is expected to continue being a two-sport player when he arrives to Oxford this fall. (Ole Miss Athletics)

Ole Miss football put the finishing touches on its 2021 recruiting class on Wednesday by signing a two-sport player out of New Jersey.

In the final hours of the February National Signing Day, Tywone Malone selected Ole Miss over Texas A&M, Tennessee, Southern California, Rutgers and others. Malone was the only player to sign their Letter of Intent and fax it over to Lane Kiffin and his staff after the Rebels secured the bulk of their class during December’s early signing period.

A four-star defensive tackle from Bergan Catholic in Oradell, N.J., Malone provides even more depth and power on a defensive front that lacked depth during the 2020 season.

Kiffin waited all day for the news of where Malone would sign, as he was not informed by Malone ahead of his decision. In fact, the second-year head coach missed the national announcement on ESPN2 altogether because he was in a yoga session and thought Malone’s decision was later than 3 p.m. CT.

When Kiffin wrapped up his yoga session, he found out Malone was already coming to Oxford.

“(I learned) when you did,” Kiffin told members of the local media during a zoom press conference on Wednesday. “I have a saying, ‘If you’re watching and you don’t know, you’re not getting him.’ We had a really good feeling. …He had not told me the actual words, when usually they do and everyone else watching and you’re not going to win.”

The chance to play for a national program under head coach Mike Bianco was another factor that played into Malone’s decision. Kiffin applauded the relationship between his football program and the baseball program at Ole Miss.

Malone, if he sticks with baseball, would make the third two-sport player on the football roster. Quarterback John Rhys Plumlee and running back Jerrion Ealy also spend their springs playing at Oxford-University Stadium.

“He is not just a great football player, but a great baseball player, too,” Kiffin said. “So, we can continue the relationship of having kids play two sports, which we definitely are about. I think it’s great for them and it’s great for the university, like Plumlee and Ealy do. You usually don’t find 325-pounders who do it, but we happened find one.”