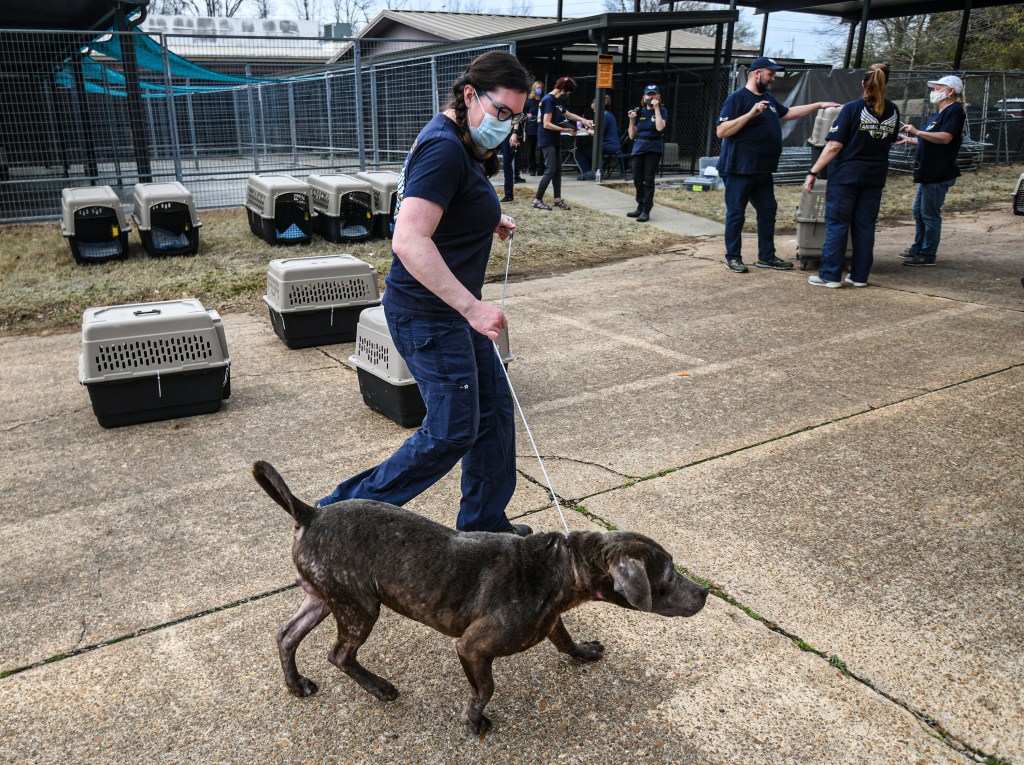 A woman with the Animal Rescue Corps walks a dog to a crate for transport as dogs are removed from the Animal Shelter in Oxford, Miss. on Tuesday, March 16, 2021. (©Bruce Newman)

The City of Oxford is bringing in an independent organization to evaluate their animal shelter and its previous operations.

During their regular meeting on Tuesday, the Board of Aldermen voted to sign a contract, hiring Tim Crum and Animal Shelter Services to provide fresh eyes on the situation surrounding the city’s animal shelter.

Crum and his staff will perform an assessment over a four-day period in April to see how the shelter can be run more efficiently and effectively and provide a comprehensive evaluation of the shelter. With the shelter being empty, Crum will evaluate the space and setup of the building, as well as look over prior management contracts between the city and nonprofit groups who ran the animal shelter.

Upon completion of the evaluation, Crum will make recommendations for the City of Oxford to manage the shelter and develop a successful animal shelter program.

“We believe that our best chance for a successful shelter is to begin by bringing in experts who can assess the needs of our particular community and then create a solid plan forward in view of that assessment,” Oxford Mayor Robyn Tannehill said. “We want an unbiased evaluation by someone who is an expert in the field and who is not currently, nor never been, connected to local agencies or individual interests. We want someone to assess our needs with a singular focus on protecting animals.”

Crum is a nationally recognized expert on fundraising, board governance and shelter operations in the animal shelter industry.

Earlier on Tuesday, the remaining animals at the shelter were picked up and transported by Animal Rescue Corps, based out of Nashville. The national nonprofit animal protection organization that specializes in assisting communities with large-scale animal issues will provide medical care and daily care until the animals are placed in one of ARC’s national placement partners.

Due to complaints and reports filed with the Oxford Police Department and Lafayette County Sheriff’s Department, which resulted in a two-week investigation into Mississippi Critterz last month, the City made the decision last week to shut down the shelter temporarily.

“Unfortunately, it’s become clear that this model of allowing a nonprofit to manage a shelter owned by the City of Oxford has been unsuccessful in every iteration since 2011,” Tannehill said.

The city owns the building, located at 413 McElroy Drive, pays utilities and provides all maintenance inside and outside of the building. The salary for an animal control officer is paid by the city, which is an agreed-upon amount based on the number of animals surrendered to the shelter by Oxford residents.

During the Board’s March 2 meeting, Oxford Police Chief Jeff McCutchen provided OPD’s findings from its investigation into Mississippi Critterz. He said the findings did not warrant criminal charges to be brought on to any individual working for the nonprofit, but several areas of concern were listed.

The Board voted at that time to form a committee to evaluate the findings and the current contract with Mississippi Critterz. On Tuesday, Tannehill announced a committee would not be formed and that the city would be bringing in Animal Shelter Services instead.

“At (the March 2 meeting) we did not have a clear plan moving forward, but I am glad to announce that things have fallen into place that will allow the City of Oxford start with a clean slate,” Tannehill said. “After two weeks of vigorous research and exploring all our options, it has become clear to me that a committee is not our best chance for success and could actually delay implementing measures that our community wants to see in place for the shelter and protection of animals.”

On Wednesday, the city’s building and grounds supervisor began assessing the shelter and the process of deep-cleaning and sanitizing the building.

The contract with Crum is for $22,000, and the cost will be shared with Lafayette County after the Board of Supervisors approved the contract during their regular meeting on Monday.