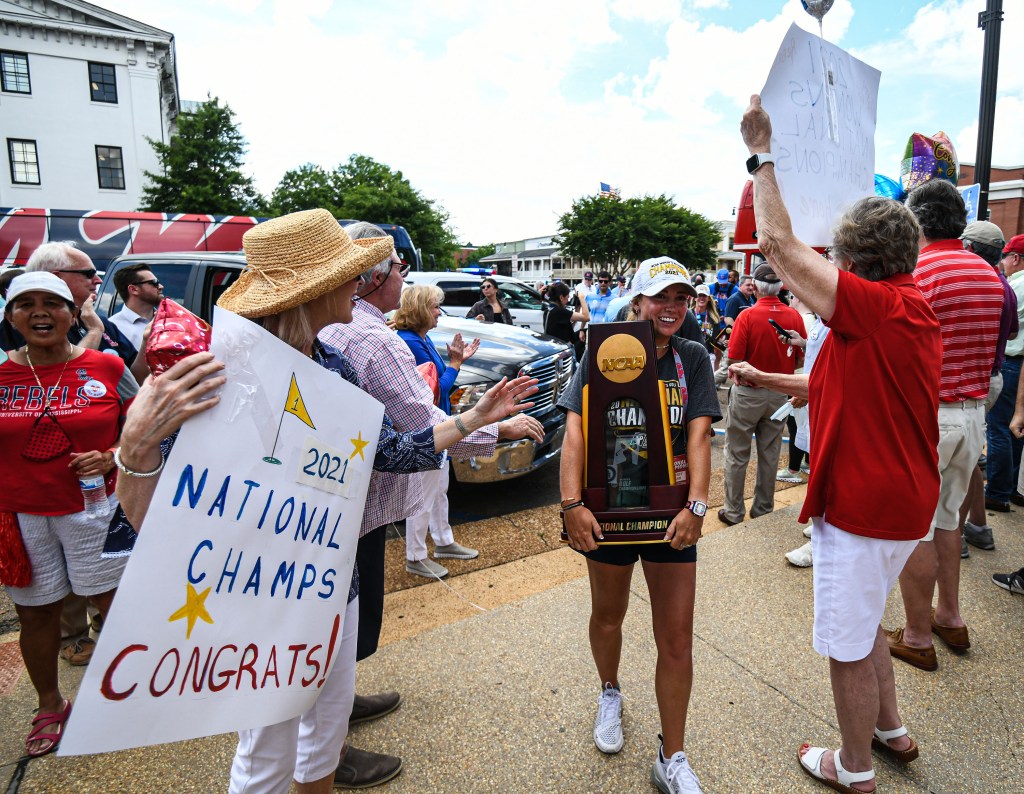 Ole Miss senior Kennedy Swann carries the championship trophy through a crowd as the women’s golf team celebrates its national championship with a parade in Oxford, Miss. on Thursday, May 27, 2021. (©Bruce Newman)

The City of Oxford welcomed the 2021 National Champion Ole Miss women’s golf team back to town in style on Thursday.

Upon landing back in Oxford at the University-Oxford Airport and greeting by several hundred Ole Miss fans, the team loaded up onto a Double Decker bus and left the airport for the Downtown Square. As they made their way to Oxford’s City Hall, fans lined around the Square to greet the national champions.

Following the bus arriving at City Hall, a rally was held in the Rebels honor by city officials. Ward VI alderman, and Mayor Pro Tem, Jason Bailey, oversaw the rally in Mayor Robyn Tannehill’s place and congratulated the team on behalf of the city.

Ole Miss head coach Kory Henkes took a few minutes to speak and thanks the crowd and the fans for the support on Thursday and throughout the week as the Rebels marched toward history out west.

“This is the reason my husband and I decided to come six years ago was for people like you guys. Family,” Henkes said. “Somewhere where we thought we could raise a family and to have a career as a golf coach. …We’ve had an incredible week. We’ve been on a journey here. I’ve been here after six years, but we knew after the COVID year last year that we had a special team here. I really felt the love out in Arizona. That’s what really pushed us through.”

Senior All-American Julia Johnson, who won her match 4 & 3 in Wednesday’s championship match, also spoke and thanks the fans but also Henkes for allowing her to come to Ole Miss and be a part of a championship program.

Four years ago, Johnson wrote out a list of goals she wanted to accomplish in her collegiate career. The final item listed was national championship, which she accomplished this week.

“I came here about five years ago as a LSU commit. I watched the Ole Miss – LSU football game and I just fell in love with this place,” Johnson said while holding back tears. “I love all of you and I’m just thankful that you accepted me. Thank you for taking a chance on a Baton Rouge girl who really wanted to come play for you. I will forever be grateful for this place and these memories made. I’ll remember this week for the rest of my life.”