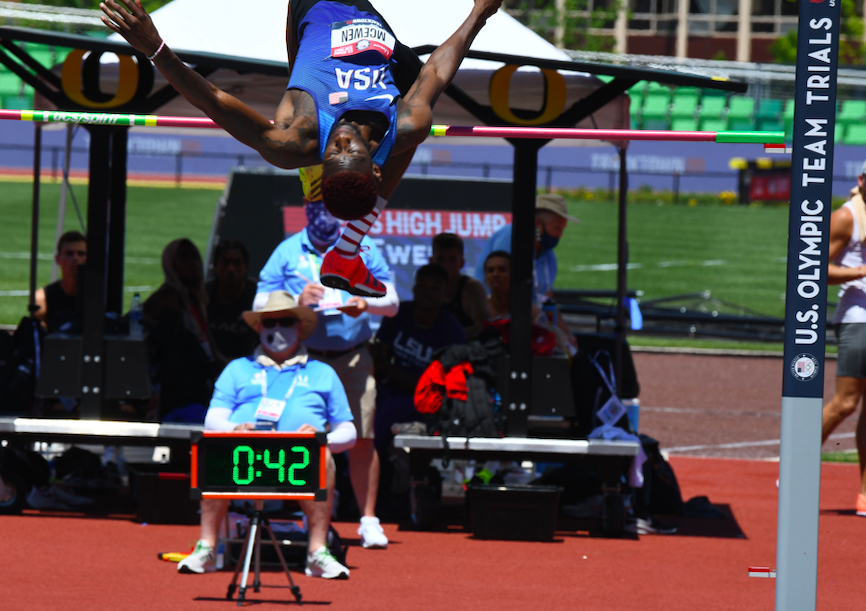 Shelby McEwen comptes in the fnals of the men’s high jump during the US Olympic Trials at Hayward Field in Eugene, Ore. on Sunday. McEwen placed third in the event, earning him a spot on the US Olympic Team for the Tokyo Olympics. (Paul Merca for Tracktown USA)

Shelby McEwen is officially a US Olympic athlete.

The former Oxford High standout earned a third place finish in the men’s high jump final at the US Olympic Trials at Hayward Field in Eugene, Ore. on Sunday. By finishing in the top three, McEwen punched his ticket to Tokyo and his first US Olympic team.

The Olympic trials were also serving as the US outdoor championships with McEwen earning bronze with a jump of 2.30 meters (7-feet, 6 1/2-inches). McEwen was one of three jumpers who attempted 2.39 meters (7-feet, 10-inches) but was unable to clear that height.

“Coming in I knew this was going to be a great competition,” McEwen said. “Just had to come in mentally focused, mentally prepared and just come out and have a good time.”

Ahead of this traveling to Oregon for this weekend’s event, McEwen spent time training at home and his home track at the Oxford Middle School campus. He has also spent time training with his mother, Sharon, which he attributed to his success on Sunday.

“It’s mind blowing, breathtaking. God first, on my side,” McEwen said of training with his mother. “My mom has been there through it all, since childhood, from the ground up. Just had to keep pushing myself. She keeps pushing me harder to do better. Work hard, train hard, and go out and get the job done. It’s just been so motivating and so encouraging just having her there with me the whole way. Knowing I had to come home and train on my own and go out and get the job done the best way I could.”

Oregon is seeing record high temperatures during the day, which caused Sunday’s events to be put on pause during the afternoon and not continue until 8:30 p.m. PST. During the high jump event, temperatures reached 115 degrees with a track temperature over 140 degrees.

“It’s mind blowing. It’s crazy. I wasn’t expecting it to be this humid,” McEwen said. “But we just had to mentally lock in, mentally prepare ourselves for it. Stay hydrated, and just go out and get the job done.”

Before traveling to Tokyo, McEwen plans to rest and ramp up his training in the next month either with his coach in Louisville or continue with his mother.

The former Alabama track and field standout noted after Sunday’s event that he will increase his reps during training, something he had tapered back ahead of the US Olympic trials.

“Recover, give myself some time to rest Recover my body because the heat here was so crazy,” McEwen said. “We’re going to get back to the grind pretty soon. Work hard. Hopefully I can get back with my coach that’s in Louisville. If not, me and my moms will just keep getting it, going to the track, and keep doing what we’ve been doing. Won’t nothing change. We’ll probably speed the intensity up the next few weeks. Get a lot more jumps in. I kinda slacked off on the jumps.”

The qualifying rounds of the men’s high jump will take place at 7:15 p.m. CT on July 29 and the finals will be at 5:10 a.m. CT on Aug. 1. The events will air on NBC and stream on nbcolympics.com and the Peacock app.