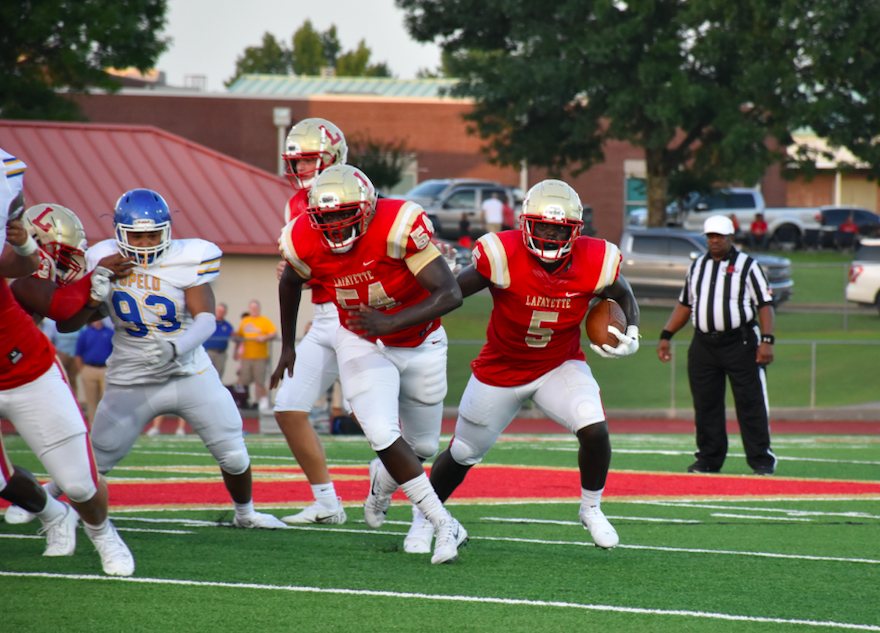 Defense took center stage in Lafayette’s season opener Friday. When it was all said a done, it was just a few costly early season mistakes that did them in.

The Commodores came up on the short end of a low scoring, physical affair, falling victim to the Tupelo Golden Wave 5-3 in non-region play in front of a packed William L. Buford Stadium.

In a highly anticipated contest, both defenses lived up to the billing, surrendering not a single touchdown on the night.

“You don’t see scores like that anymore. When you get two defenses like this on the same field, stuff like this happens. They’re a good team, you can’t take anything away from that, but there were things I saw out there that made me really excited about our team this season,” LHS head coach Michael Fair said.

In his first varsity start, Will Dabney utilized the short range game while running the ball occasionally on third down. Jay Reed provided most of the offensive production before Tupelo adjustments shut him down in the second half.

“You’re taking a guy that played tight end last year (Dabney) and throw him up against one of the best defenses in the state. I think he held his own. He’s coming on in this process,” Fair said.

Both squads saw their first offensive drive of the season end in three-and-outs. After that, the Commodores rolled the dice on 4th-and-1 and Jay Reed delivered. Lafayette would use that as well with a 22-yard screen pass to Trikyus Woodall to get their first points of the season. Hudson Nelson’s 21-yard field goal gave the Commodores a 3-0 lead with 1:51 left in the opening quarter.

On the following offensive possession, the Commodores converted another 4th-and-short situation. However, Will Dabney would under throw Kylen Vaughn in the end zone and be picked off by Tupelo’s Jordan Herring. Jay Reed would provide most of the offense that overall wasn’t there for both teams in the first half.

Defensively, the Commodores surrendered just one first down to Tupelo while forcing them to go three-and-out three times in the first half.

Coming out of the locker room, Lafayette had a golden opportunity in front of them to get six courtesy of a DJ Burgess interception on the first play of the third quarter. Tupelo proceeded to hold on four straight plays and force the turnover on downs.

After back-to-back three-and-outs, Tupelo found itself on the board for the first time, but by way of a safety. A bad snap past Dabney went out of the back of the end zone and Lafayette saw their lead trimmed down to 3-2 with 5:39 left in the third quarter.

Following the free kick, Tupelo’s Quay Middlebrooks delivered their biggest play of a night with a run that ended inside the Lafayette 10 yard line. The Commodores continued recent trends and forced a 25 yard field goal from Gideon Deaton that went wide left.

Two plays later, Lafayette gifted Tupelo another opportunity. This time, Deaton delivered with a successful 39 yard field goal with 1:53 left in the third, giving the Golden Wave the lead for good. The fourth quarter featured four consecutive punts and a fourth down stop for Tupelo that sealed the game with 2:11 left to play.

The Commodores will be back in action on Friday, traveling to Horn Lake in non-region play.