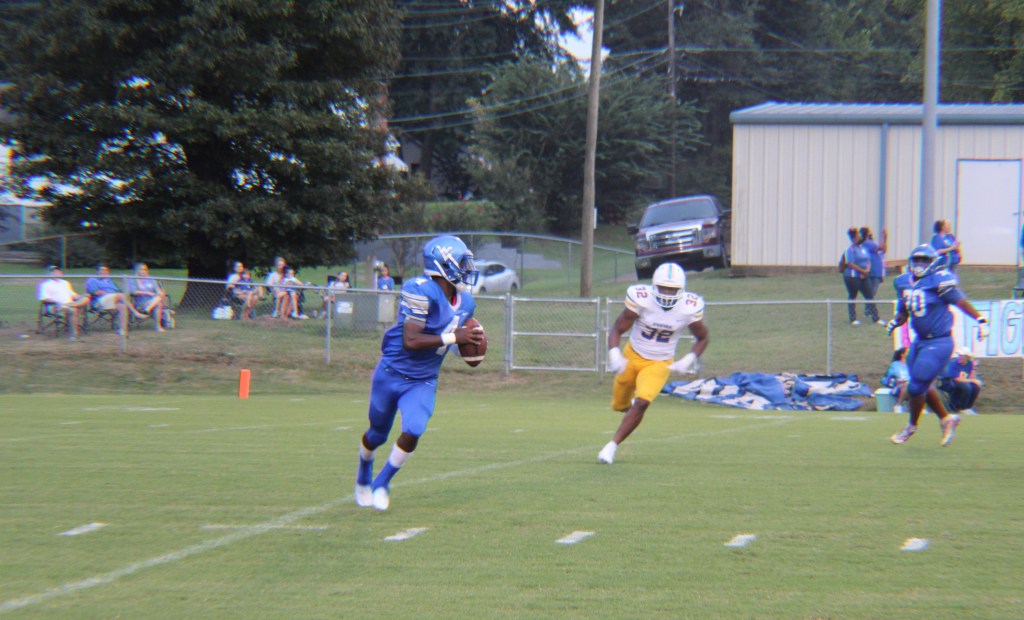 Senatobia. The Warriors reclassified to class 4A after being in Region 2-3A with the Blue Devils last year. Senatobia ran past Water Valley with 5 rushing touchdowns to win 42-17.

“We can’t win ball games pushing each other around after the whistle,” said Water Valley coach Brad Embry.

touchdowns. Two of the scores were a three yard and 16-yard runs by Jordan Osborne. The Warrior defense forced the Blue Devils to fumble the ball leading to a touchdown drive, and suffocated the Blue Devil offense forcing Telford to make bad throws and throw an interception.The Blue Devils ended the scoring drought with a 39 yard Jon Surrette field goal to make the score 21-10 at the half.

The second half started with the Warriors gaining early momentum on a 61-yard jet sweep to set up a touchdown. The Blue Devils would answer back with a 6-yard touchdown by Que Carothers to make the score 28-17 that would be the final points the Blue Devils scored on the night as Jordan Osborne and penalties extended drives for the Warriors.Osborne would add two more touchdowns on runs of 23 and 48 yards as the Blue Devil defense had no answer for him.

This caused frustration among the Blue Devils leading to multiple penalties.The Warrior defense would also force Telford into throwing his second interception of the night.

Water Valley does not currently have an opponent for next week because of the Bruce Trojans having to quarantine. They are currently looking for an opponent. They will return to action on Sept. 17 as they travel to Calhoun City(1-0). Calhoun City defeated Water Valley 40-21 in their last meeting.