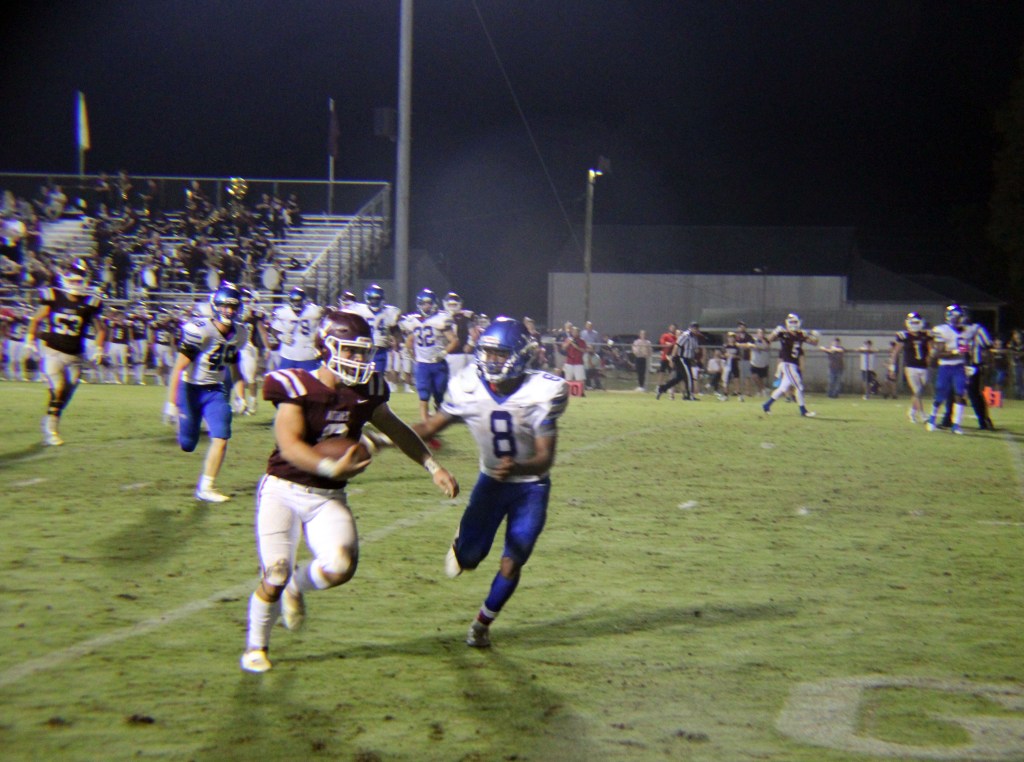 Water Valley’s Jaden Morgan (8) looks to make a tackle against a Kossuth running back at Larry D. Mitchell Stadium in Kossuth on Thursday. The Aggies defeated Water Valley 34-20. (Jacob Palmer)

KOSSUTH — Water Valley came into Thursday’s game against the Kossuth Aggies with a chip on their shoulder after defeating Mantachie the week before. Both teams went into the game undefeated in region play. Kossuth defeated Water Valley 34-20.

The Blue Devils and the Aggies played a day earlier this week due to possible inclement weather in the area on Friday.

Kossuth (6-2, 3-0 Region 1-3A)  jumped out to an early 13-0 lead as Jack Johnson gashed the Blue Devils on the ground, highlighted by a 63-yard run to set up the 3-yard score and a 31-yard touchdown as they shut out the Blue Devils in the first quarter.

The Water Valley (4-3, 1-1 Region 1-3A) offense would answer back in the second quarter with a balanced offensive attack of their own as they scored two rushing touchdowns at the goal line by CJ Telford.

The Blue Devils defense would clamp down in the second quarter by not allowing the Aggies to score a point. The defense was highlighted by Savion Freeman’s one-handed interception to close the half for the Blue Devils.

“They dictated the game, and they played well. This group of kids have a lot of pride, and we have to do things better than we did and expect to win up here, “said Water Valley head coach Brad Embry.

In the second half, the physicality of the Aggies would be too much for the Blue Devils to overcome, as they wore down the Blue Devils and used Blue Devil miscues and penalties to put the game away.  The Aggies used a muffed Water Valley punt to take a 20-13 lead on a 19-yard touchdown pass to Jack Hancock.

Water Valley would tie the game on its next possession with a 39-yard pass from Telford to Marion Morgan. Still, the physical Aggie run game would take its toll on the Blue Devil defense as they rushed for a 30-yard touchdown and another touchdown by Johnson at the goal line to put the game away for Kossuth.

“We have to learn to win. It’s a process, and we are still learning,” said Embry.

Water Valley will continue region play next week as they return to Bobby Cark Field to Booneville (4-3, 0-1 Region 1-3A). The game will be senior night for the Blue Devils.  Water Valley last played Booneville in the 2018 playoffs.